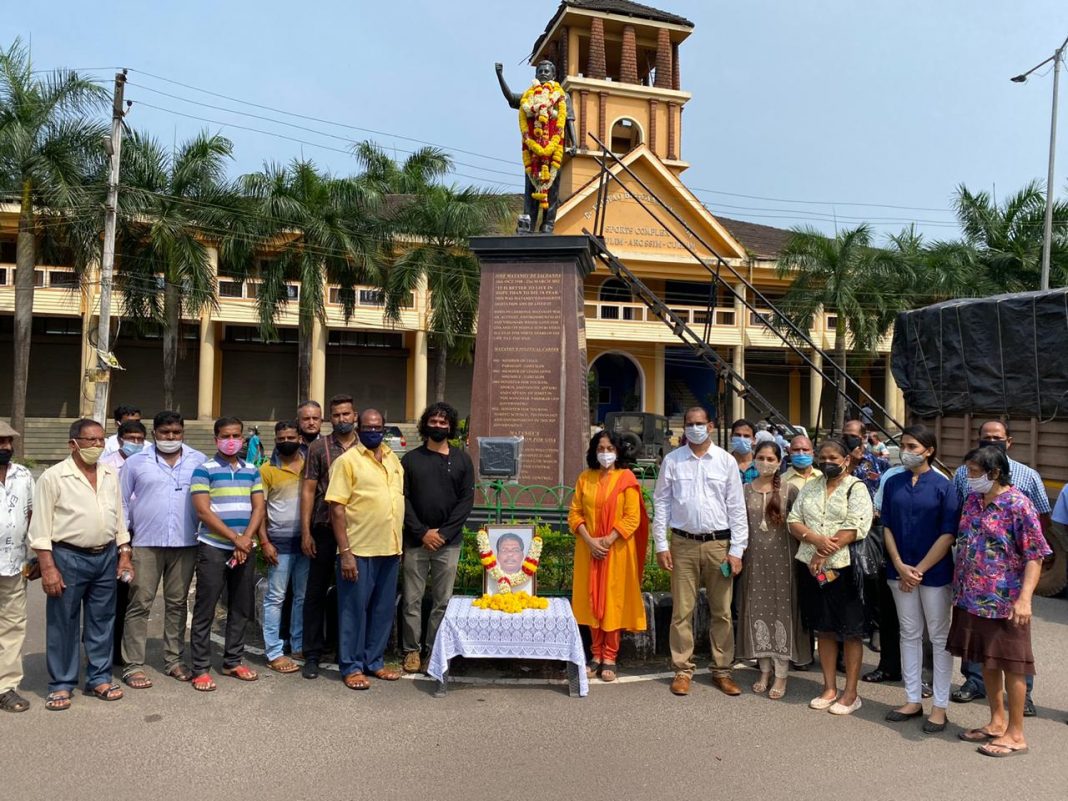 Panaji: Goenchea Raponkarancho Ekvott (GRE) on Saturday along with Cortalim MLA Alina Saldanha paid tribute to late Matanhy Saldanha on his 72nd birth anniversary. Several members of GRE assembled at his statue at Cansaulim for garlanding ceremony.
Speaking on the occassion, GRE president Agnelo said that Matanhy Saldanha was like a father to the fishing community of Goa and India. “He was the founder of GRE and National Fishworkers Forum (NFF). It is only because of his 40 years of selfless service that has kept the fishing community still alive,” he said.
Rodrigues stated that the late leader was the first to  start the environmental revolution in Goa. “His first agitation at the age of 24years against the Zuari Agro chemicals resulted into the enacting of Water Pollution Act which eventually benefited the world. Besides  he was instrumental in demanding and formulating several environmental laws which has helped today fishing community and conserving Coastal Ecology,” Rodrigues informed.
GRE and Agnelo has urged the state government to make a strong case for Bharat Ratna for Late Matanhay Saldanah for his exceptional contribution to the environment and the downtrodden .
GRE General Secretary Olencio Simoes along with MLA Alina Saldanha paid his tribute to late Thomas Peter, who died fighting for the fishing community of Kerela and India and promised to carry forward his legacy .
Simoes urged the government to keep his promise of saving Matanhy’s legacy and demanded that the chief ministe Dr Pramod Sawant scrap the Coastal Economic Zones (CRZ) notified in Goa in 2016 in which Sagarmala has planned 30 projects to make Goa Coal hub.
GRE has also urged the CM to drop the new  CRZ notification 2019 which gives exemption  to all ports related infrastructure in Goa. Demanding that the major port authorities bill 2020 which gives autonomy to the Mourmugao Port Trust(MPT) should be dropped immediately, Simoes stated the entire jurisdiction of MPT should be handed over to Captain of Ports, as the new bill has  given MPT  total unauthorized powers to lease 53km of coastline, 76850 acres of water spread area and 533.48 acres of land area  to private players like Adani, Jindal etc. “The National waterways bill 2016 has privatized 6 rivers of Goa which also need to be dropped as this act will bring port led development across 200km of waterways  irreversible damage to  Goa’s fragile ecology as Goa consist of 40 estuarine, 8 marine and about 90 riverine islands which will be totally impacted,” he informed.