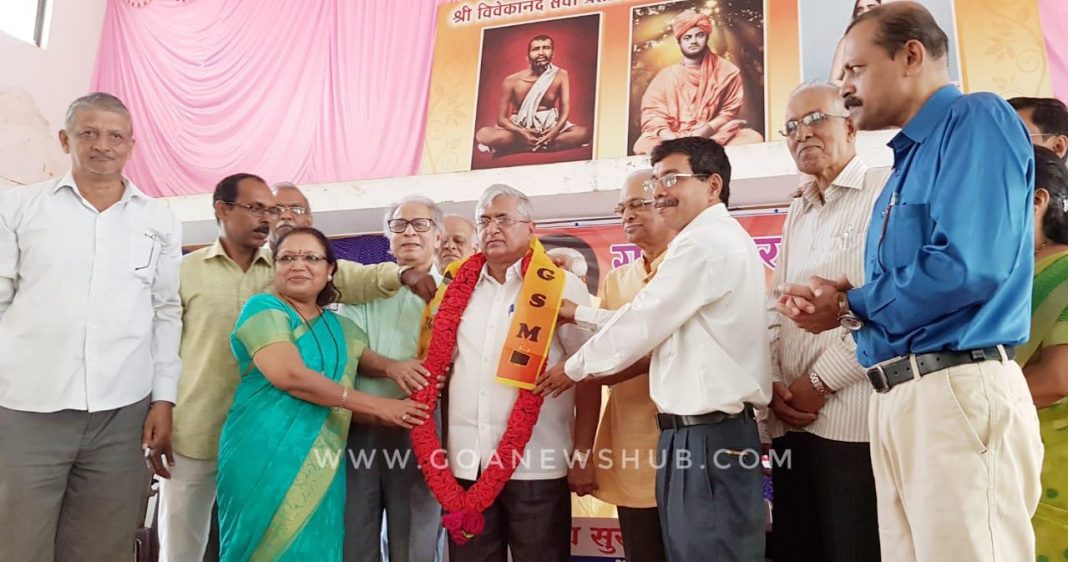 Panaji: Subhash Velingkar was formally inducted in Goa Suraksha Manch on Sunday, the party which he has mentored since its inception in 2016. The party also appointed him as its Chief.

Velingkar has been mentoring GSM since the year 2016 when it was formed in the run up for Goa Legislative Assembly polls held in the year 2017. The party was formed after Velingkar developed serious differences with BJP over the issue of Medium of Instruction in Elementary Education.

Addressing the workers after being inducted in the party and also declared as its Chief, Velingkar said that the party will form its government in Goa in next five years.

“Considering the political situation in Goa, the mid-term polls are imminent in the State. Mostly the elections for Goa Assembly would be held along with Parliamentary polls. The upcoming Assembly polls would be semi-final for GSM,” he said.

“We will be able to form our own government five years after that and we will have our own Chief Minister governing the State,” the former RSS Goa Chief added.

He said that the BJP was brought to power in Goa after Congress failed to govern and instead plundered the State. “But BJP also walked the same path and now there is a requirement and sense of urgency to replace BJP,” Velingkar said.

He said that the people of Goa are already suffering due to failure of BJP to govern and stubborn behaviour of ailing Manohar Parrikar to continue on the chair of the Chief Minister.

“For so many months, government is not functioning. They are pretending as if Parrikar’s health is well. Till, Health Minister Vishwajit Rane declared that Parrikar is suffering from pancreatic cancer, his medical condition was not even formally announced,” he said.

“No one should face this kind of medical condition. Even the enemy should not face it. But, in case of Parrikar, he is answerable to the people. He has to understand that he is taking people for granted,” Velingkar said.

He said that the State is in doldrums. “People are suffering. Parrikar was responsible for closure of mining industry. We don’t support illegal mining but legal mining should have been allowed. 3.5 lakh people are dependent on mining for their livelihood. The belt like Sanguem and Sankhalim in Goa has 80 per cent people dependent on this business,” he said.

Velingkar stated that the coalition partners which had claimed that they are with the government with common intention have now started showing their real colours. “They are publicly demanding that the power should be distributed to them and not centered around Parrikar,” he said.