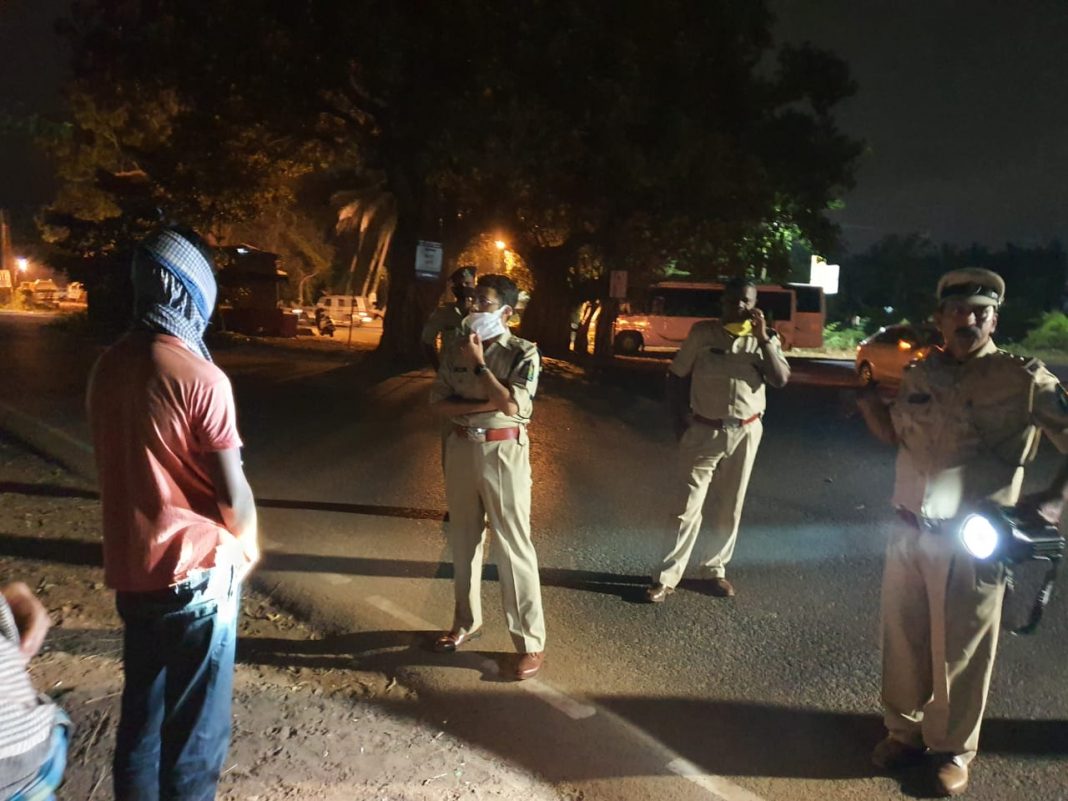 Porvorim: Ever since the state government has announced the lockdown in order to minimise the spread of COVID 19, the men and officers in all ranks of the district Police, North have implemented the lockdown by taking due measures like sealing of the state borders, checking of people and vehicles at every junction etc.

During the announcement of the third continuous phase of the nationwide lockdown, the central government has eased a number of restrictions and allowed many non-essential activities in green zones- the state of Goa being one amongst it.

With easing of restrictions and allowing people stranded in different parts of the country to return to their respective native place, most of the migrant labourers who made this state as their home wish to return back to their native places.
Although the government has introduced an online facility to register such migrant workers to register and thereafter to eventually facilitate their return to their won states, most of the migrant labourers hare showing signs of restlessness and are eager to return to their native as quickly as possible.

With the wide use of social media, information- mostly false and unverified- with regards to opening of state borders to facilitate the return of migrants is being falsely spread or circulated on many social media platforms.

Such messages, create a sense of panic amongst migrant labourers and in an effort not to miss the opportunity to return home in troubled times, the migrants have even made abortive bids to leave the state, sometimes by even undertaking a journey on foot to far flung railway stations in an effort to board a train.

While the state government has made necessary provisions to facilitate the return of such people desirous of returning to their states, all police stations in the North under the proactive initiative of Utkrisht Prasoon, IPS, the SP North has undertaken a massive exercise of extending all necessary co-operation and assistance to all labourers staying in different pockets or areas within the jurisdiction of their respective police stations.

SP North, Utkrisht Prasoon has been visiting every area within all the police stations across all talukas in the North district and have been actively interacting with the migrant’s workers and have been reassuring them of all possible help and assistance in ensuring their safe return from Goa to their respective state.

“Along with the SDPOs and the Police Inspector incharge of each of the Police Station in the North District, I have visited all places where migrants from differ other states are currently residing. They have been explained about the measures being undertaken by the state government in respect of facilitating their return to their home states and they have further been requested not to fall prey to fake and unverified news being continuously circulated in the social media. I have personally appealed to them to not to take any decisions based on false news and further informed that our officers from the police stations are in the field 24x 7, should they need any assistance, be it provision of groceries, medicine etc if at all need, till they depart by the respective mode of transport arranged by the respective state Government” stated SP while interacting with the media.

“Officers and men from every police stations in the North District have been regularly visiting the areas where migrant workers reside and besides providing the workers with groceries and other daily needs, have also been assisting them in filling forms online. All our officers have share their mobile numbers with the workers and have requested them not to believe rumours and instead to confirm directly with officers about any news in circulation. Besides this, our officers are regularly updating them about the progress made in respect of the steps undertaken to facilitate their return to their native.” Stated Edwin Colaco, SDPO Porvorim

With the central government easing most restrictions during the third phase of continuous lockdown and prohibiting non-essential movement from 7pm to 7 am of the next day w.e.f. f 4th may 2020, the North Goa Police have strengthened the deployment at all major junctions to check for violations and in order to take due legal actions against those violating the lockdown. In order to create awareness amongst all the citizens about the prohibition of non-essential movement during designated hours, the officers of each of the police station have been making announcements within the areas in this regard and requesting citizens not to undertake non-essential travel during the time frame of prohibition.

The SP North has ensured implementation of all lockdown guidelines by every men and officer on field. Thus the effective action has resulted in booking large number of lockdown violators and impounding of nearly 500 vehicles involved in such violations. The North Goa police have also booked about 300 odd persons for failing to wear face masks.