Filmmaking also about deeply listening to stories around: Ben Rekhi Immigration is one of the big themes of our era: Isabelle Couture Curiosity about a photograph lead to the making of ‘Curiosa’: Lou Jeunet 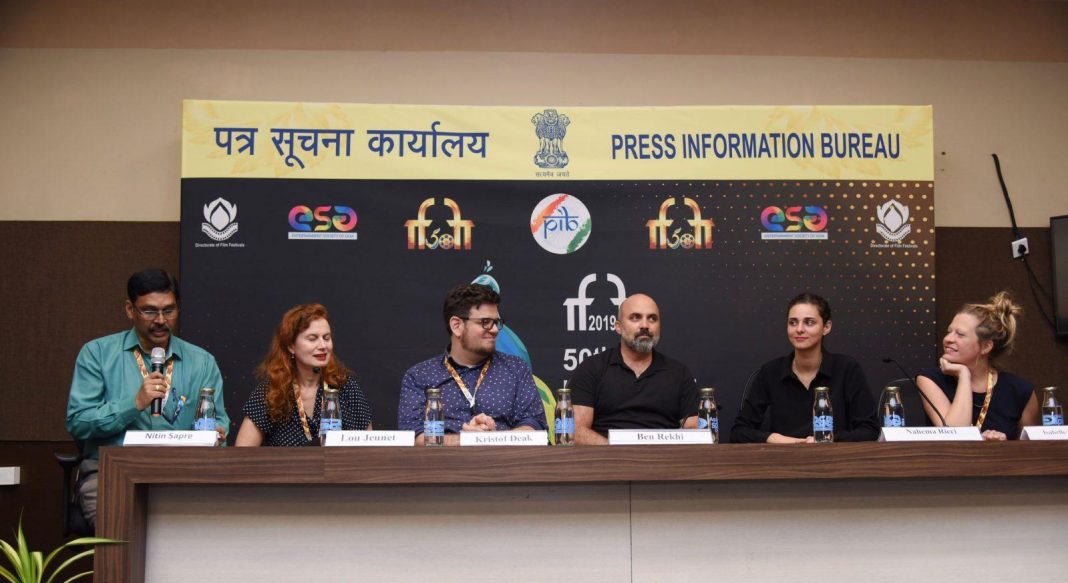 Filmmaking is not only about telling stories but also deeply listening to the stories happening around you, said Ben Rekhi, Director of ‘Watch List’. He was participating in a press conference along with Director of ‘Curiosa’ Lou Jeunet, Director of ‘Captives’ Kristóf Deák, Producer of ‘Antigone’ Isabelle Couture, and actress Nahema Ricci at the 50th International Film Festival of India in Panaji today.

On his film ‘Watch List’, Ben Rekhi said that the film is set in the Philippines against the background of drug wars. “ It is based on a true story in which a woman is forced to protect her children by all means necessary when her husband got killed by police under mysterious circumstances”, he said.

Replying to questions Ben Rekhi said that it is the film festivals that keep the independent films alive especially in the time of YouTube and streaming platforms. “ Film festivals may have this bad reputation of turning into the showcasing point of  art films. But it is a stereotypic view. Film festivals are fantastic and have room for all kinds of films like socially relevant cinema, comedies and art cinemas”, he added.

Describing his period drama set in Budapest of 1950s,  Director of ‘Captives’ Kristóf Deák said that the film is a real life story about an unexpected and unusual visit paid by state secret police to a family. “ Instead of arresting the family the police held the family captives in their own home. As the police start to capture every other one who paid a visit to the family, people keep accumulating in the house. Some of the scenes had 16 actors in the frame at a time and it was the biggest challenge for me,” he said.

Producer of ‘Antigone’, Isabelle Couture said that her film speaks about immigration, police brutality, collective movement and solidarity. “ Immigration is one of the big themes of our era. But each country will be experiencing it differently. We were looking for authenticity hence didn’t cast any star or known face”, she explained.

Talking about the preparations for her character in Antigone, actress Nahema Ricci said, “The biggest challenge was to create something realistic when I had to portray a character that is mythological. It is Important to create a space of trust. It was a lot of pressure to do justice to the character but the love from the audience made it all worth.”

Attending the press conference, Director of Curiosa Lou Jeunet said, “ “It is my first feature film. I fell in love with a photograph of a woman and it made me curious to investigate about it leading to the making of Curiosa.”

Pierre Louys is a Parisian dandy and poet on the verge of fame. Pierre and his friend Henri De Régnier are both madly in love with Marie de Heredia, the cheeky daughter of their mentor. Despite her feelings for Pierre, Marie eventually marries Henri who is in a better situation. Badly hurt, Pierre leaves for Algeria where he meets Zohra, a bewitching local girl with whom he shares a tumultuous relationship and a passion for erotic photography. Directed by  Lou Jeunet, Curiosa is a passionate love story set against a backdrop of sexual freedom, loosely based on the relationship between 19th century authors Pierre Louÿs and Marie de Régnier.

In 1951 Budapest, the communist secret police shows up at the door of an ordinary family – but instead of deporting them, the officers move in and lock them up in their own home. Days go by without any explanation as secrets, lies and paranoia soon begin to unravel the growing number of captives in the apartment. An incredible but true story from Academy Award winning director Kristóf Deák.

Sophie Deraspe’s provocative and timely adaptation of the classic Greek tragedy of the same name reimagines the story of a woman’s quest for justice as a commentary on the immigrant experience in contemporary Montreal. Film is being screened in IFFI’s International Competition section.

In this crime thriller happening in the Philippines, a widowed mother is forced to enter Manila’s dark underworld of cops, criminals, and drugs after her husband was murdered in an extrajudicial killing. The movie directed by  Ben Rekhi is competing for the coveted golden peacock Prize at IFFI.