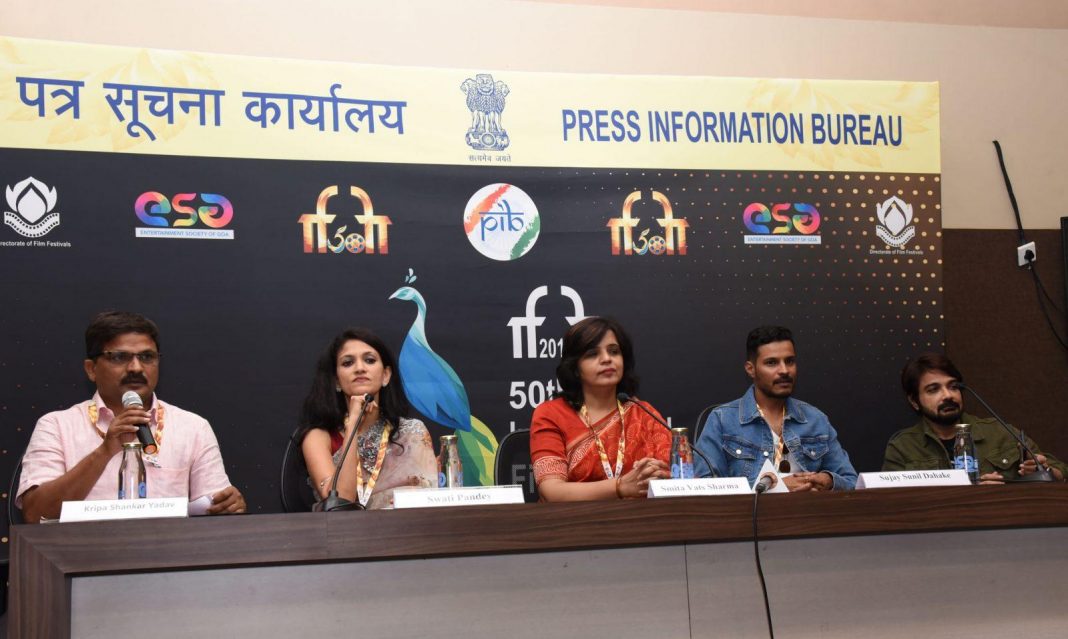 Actor Prosenjit Chatterjee of movie Jyeshthoputro directed by Kaushik Ganguly, said that he is happy that for tenth year in a row director Kaushik Ganguly’s movie is being screened in IFFI. This movie was originally imagined and scripted by late Rituparno Ghosh but suddenly he passed away. “The movie talks about an emotional side of superstar. It tells what happens when a superstar returns to his birthplace after a gap of ten years.” Said Mr Prosenjit while speaking in the Press conference in IFFI 2019 at Panaji Goa.

Movie espouses small town values and has essence of Rituparnoda, Prosenjit added.  “Even art films earn a lot of commercial success, differentiating art films from commercial films is not entirely correct and it is just about good film and bad films”, Prosenjit said.

Director of movie Tujhya Aayla, Shri Sujay Dahake said, This film is about personal journey of writer Niyaz Mujawar and me. It is my attempt to explore the not-so-discussed topic of verbal violence.” I believe that we should only think whether the movie resonates with audience or not, and nothing else, he concluded.

Swati Pandey Director of movie, Elephants Do Remember, thanked IFFI and DFF for arranging golden jubilee celebrations in a big way. She further said,  “This is my debut film and I have realised that we have to just dream about the idea for film, and that is the most fun part of it. You can start at any age and nothing stops you from living your life. And that is the theme of this movie. Theme should excite you”.

Her movie is a biographical montage presenting the enthralling journey of Rama Khandelwala’s life. Khandewlala is the oldest tourist guide of India and recipient of Presidential award. In movie she reminisces her revolutionary youth in the Indian National Army, her connection with Netaji Subhash Chandra Bose, and India’s Freedom Movement and paints an intriguing collage of the present with the past. Films Division has produced this film. Director General of Films Division Mrs Smita Vats Sharma said on this occasion that Films Division since 1948 is supporting  documentaries, non-features and short film making and the organisation of IFFI itself shows that there is some space which always requires government support and government is doing that.

Previous articleIFFI will be awarded the ICFT-UNESCO Fellini medal
Next articleFilmmaking also about deeply listening to stories around: Ben Rekhi Immigration is one of the big themes of our era: Isabelle Couture Curiosity about a photograph lead to the making of ‘Curiosa’: Lou Jeunet