Panaji: Several workers of Congress party in Goa on Tuesday held a protest march on Raj Bhavan demanding Governor’s intervention to solve some of the issues that are plaguing the State.

Congress party has also emailed memorandum to Prime Minister Narendra Modi urging that Centre should immediately revoke the letter written to Karnataka exempting one of the project on Mahadayi river from mandatory Environment Clearance (EC). 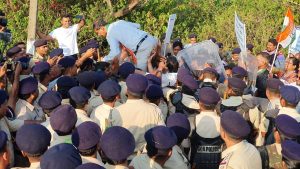 The leaders were stopped by strong posse of policemen who were stationed at the Raj Bhavan gate.

Chodankar who tried to cross over the barricade was stopped by policemen leading to mild skirmish between the Congress workers and the police.

Congress has been demanding intervention of Governor on several issues including economic meltdown in the country. The local issues including drop in tourism and also failure of State government to save Mahadayi river from being diverted by Karnataka were highlighted by the opposition party leaders.

Before holding the protest march, Congress emailed their memorandum to the Prime Minister raising concerns about Mahadayi river water diversion.

“It is shocking to know that the Ministry of Environment, Forest (MOEF), Government of India has issued a clearance for the Kalsa-BhanduraProject of Karnataka for diversion of water from Mahadayi river when the dispute is pending before the Hon’ble Supreme Court and the Mahadayi Water Disputes Tribunal,” reads the memorandum sent to the Prime Minister.

“The people of Goa will never support any diversion of water from Mahadayi which is a Lifeline of our State,” the Congress has said.

Mahadayi is an inseparable life line of Goa and if any quantity of water is allowed to be diverted for any purpose, it will create an irreversible damage to the ecology of Goa, the memorandum reads.

“We are of the opinion that there cannot be any discussion on water sharing of Mahadayi River with any State as other large states have numerous rivers to be tapped,” the opposition party has said.

If Karnataka is allowed to go ahead with its plan, then Goa is going to get severely affected as eleven hydroelectric projects are planned on flow of Mahadayi river to generate 58 MW power but diversion of water by Karnataka would reduce the flow and jeopardize these mini hydel projects thus depriving an energy deficient state like Goa from generation of clean and green power, the memorandum reads.