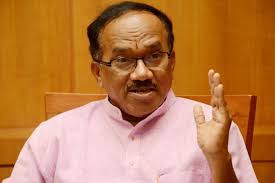 Panaji:  Goa Lokayukta on Monday ordered that the inquiry by Central Bureau of Investigation (CBI) should be conducted against  former State Chief Minister Laxmikant Parsekar and two other officials for renewing the Iron Ore mining leases, which were quashed by the Supreme court in February, 2018.

The institution has also indicted then State Mines Secretary Pawan Kumar Sain and then Director of Mines and Geology Prasanna Acharya in the order, which was pronounced on Monday.

Goa Lokayukta Justice P K Misra ordered that “this institution is satisfied that the public functionaries concerned have committed criminal offence  punishable under Section 13 (1) (d) of the Prevention of Corruption Act, 1988 and criminal conspiracy under section 120-A of the Indian Penal Code.

Lokayukta has said that the institution is satisfied that the complaint involving allegation against Parsekar, Sain and Acharya  has been substantiated and keeping in view the magnitude and seriousness in the dereliction of duty, a declaration as contemplated under section 16A (1) is required to be made that the public functionaries concerned should not continue to hold office held by them. However, since Parsekar has ceased to be the chief minister/minister, no such declaration is made with respect to him.

The Lokayukta also ordered that respondent Sain and Acharya are unfit to continue to hold office held by them.

The apex court in February 2018 had quashed renewal of 88 mining leases bringing to halt the iron ore extraction and export industry in the State.

Petitioner, Goa Foundation, had said that the renewals that were carried out from November 2014 appeared to be “result of corrupt acts” by then chief minister and officers of directorate of mines.

Advocate Claude Alvares had claimed in the petition before Lokayukta that “the above persons entered into an unholy conspiracy to renew 88 mining leases to several persons in Goa.”