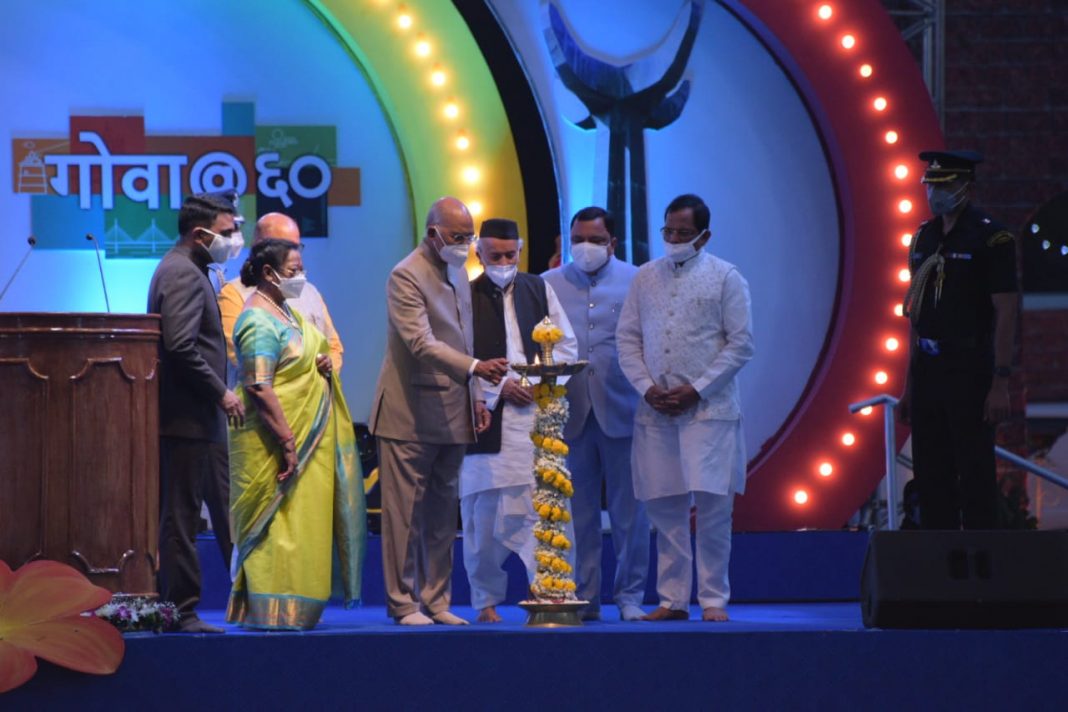 Panaji: President of India Ram Nath Kovind on Saturday attributed the progress of the Goa during last 60 years of its liberation to the various governments that had put in the efforts.

Kovind was addressing state government organised event “Goa @60” in Panaji on the occasion of Goa Liberation Day on Saturday.

“Goa was not a progressed state when it was liberated from Portuguese rule but 60 years down the line, it has highest per capita income,” the President said.

“This achievement cannot be credited to any particular individual or the period. This has been achieved due to efforts of various governments and different situations underwent by the state,” Kovind said.

During his speech, the President also referred to former Congress chief minister Digambar Kamat, who is current Leader of Opposition, as one of the person who contributed towards the progress of the state.

Referring to current CM, Kovind said that Sawant has taken up a mission “Atmanirbhar Bharat, Sawayampurna Goa” and is taking ahead legacy of his mentor late Manohar Parrikar.

The President of India made special mention about the pharmaceutical companies, operating in Goa for the role played by them, globally, during COVID-19 pandemic situation.

He also said that the state with its pool of manpower is progressing towards becoming an important centre for Infotech companies.

In his speech, Kovind referred to the pre-liberation era when Mahatma Gandhi used to say that “like Kashmir and any other state, Goa is also part of India.”

“He had faith in India’s unity and integrity. Like Gandhiji, Ram Manohar Lohia also believed that Goa was a part of India,” he said.

The President of India paid his tributes to all those who fought for the liberation of Goa. “Goa’s liberation struggle was not just for civil liberties but it was also to join the state to mainstream India,” he said.

“All the organizations and communities together fought to liberate the state from Portuguese rule,” he commented.

The President said that entire nation is celebrating this day, as on this day  Goa was liberated from 450 year long Portuguese oppressive rule.

Speaking on the occasion, Union Minister Shripad Naik paid homage to all the freedom fighters that fought for the liberation of the state.

The Union minister of state for defence also hailed the Armed Forces for their planned mission to add the state to mainstream India.

Naik said that the  activities like tourism, mining has been backbone of the economy but at the same time, thrust should be given to revive agriculture sector in the state.

Indirectly referring to the anti-double tracking of railway line agitation, Naik commented “it has been a habit to oppose developmental project. “We should sit together and resolve the differences,” he said.

Speaking about agitation on Farmers’ Act, Naik said that the farmers’ agitation which had started in Punjab is calming down. “The farmers have realized the anti-national intensions of the opposition parties. The farmers have full faith in the leadership of Prime Minister Narendra Modi,” he added.

Chief Minister Pramod Sawant said that Goa has a long history of struggle, the colonial rule which is much beyond the British Rule in India.

“The December 19, 1961 is significant in the history of India as Goa’s liberation completed the independence of India,” he said.

The Chief Minister said that within next one year, the government will reach out to every citizen of Goa through various programmes.

“The Goa at 60 event will decide the blueprint for next sixty years on various sectors including education,” he said.