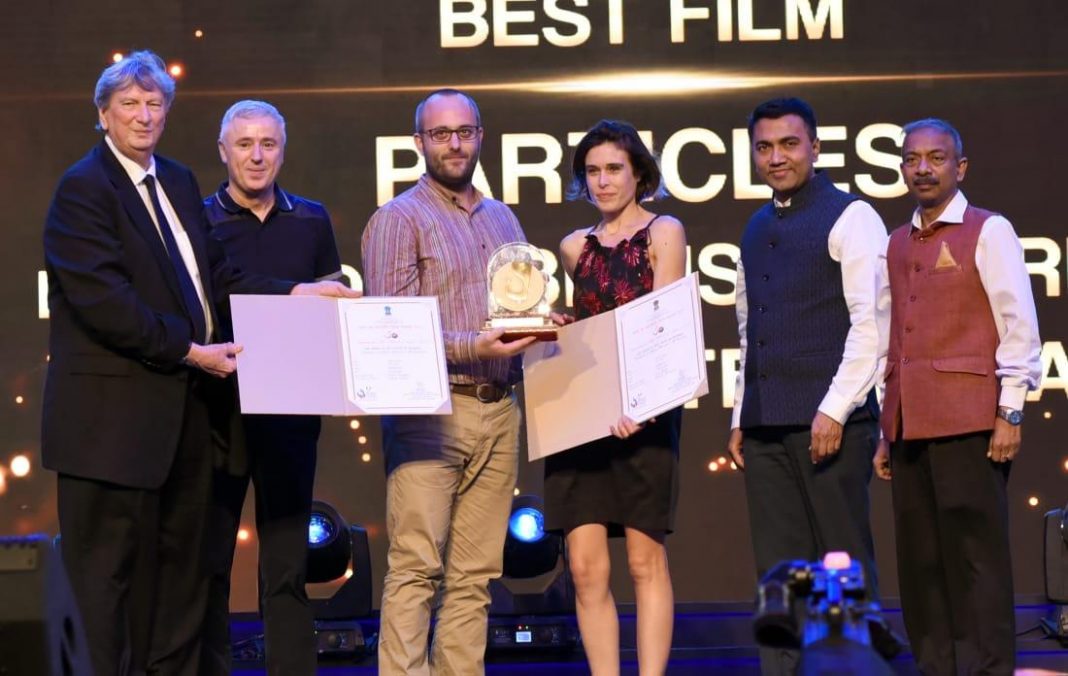 ‘Particles’ directed by Blaise Harrison and produced by Estelle Fialon has won the coveted Golden Peacock Award at the 50th International Film Festival of India (IFFI), which concluded in Goa on November 28, 2019. The Golden Peacock Award carries a cash prize ofRs 40 lakhs to be shared equally between the Director and the Producer, Trophy and the citation. ‘Particles’ is an “ambitious yet modest film about the mysteries of being a teenager,” said the jury.

Lijo Jose Pellissery won the Best Director Award for his film ‘Jallikattu’. This Malayalam film is the portrait of a remote village where a buffalo escapes and causes a frenzy of ecstatic violence. In a story that starts as man versus wild, it doesn’t take that long before man becomes the wild. The jury said that they honour the “intricate and complex choreography of this very original and anarchic film”.

The Best Director gets the Silver Peacock Award, a citation and a cash prize of Rs 15 lakhs.

The Best Actor (Male) Award has gone to Seu Jorge for his portrayal of Carlos Marighella in the Brazilian movie ‘Marighella’. He bagged the award for “ the powerful and charismatic portrayal of a revolutionary, very relevant in our increasingly authoritarian times”.

The Best Actor (Female) Award has gone to Usha Jadhav for her portrayal of  ‘Prabha Mai’, in the Marathi film ‘Mai Ghatt: Crime No. 103/2005’. Usha Jadhav got the coveted prize for her “understated and powerful performance of a mother defending her child’s honour against the injustice of a corrupt system”.

Both Best Actor (Male) and Best Actor (Female) are honoured with the Silver Peacock Trophy, certificate and a cash prize of Rs 10 lakhseach.

Pema Tseden walked away with the Special Jury Award for his film ‘Balloon’. The film set in Tibetan grasslands got the prize for “the beauty of the film language and the authenticity of the actors”.

Centenary Award for ‘Best Debut Feature Film of a Director’ is shared between Amin Sidi Boumediene for ‘Abou Leila’ and Marius Olteanu for ‘Monsters’. Abou Leila’ tells the tale of two childhood friends who crossed the desert in search of Abu Leila, a dangerous terrorist. ‘Monsters’ tells a relationship drama in three chapters that describes the current state of a couple over 24 hours.

Award carries Silver Peacock, a certificate and a cash prize of Rs. 10 lakhs

‘Hellaro’ directed by Abhishek Shah earned special mention from the jury for the “incredible music, it’s colour and graceful choreography”. Though set in a time 45 years ago, issue of woman’s empowerment portrayed in the film is even more relevant today, said the jury.

Italian film ‘Rwanda’ directed by Riccardo Salvetti won The ICFT –UNESCO Gandhi Medal instituted by the International Council for Film, Television and Audiovisual Communication, Paris and UNESCO. The medal bears a portrait of Gandhi engraved by the French artist Pierre-Yves Tremois. Etched underneath is Mahatma’s message of hope : “ In the midst of darkness light prevails”