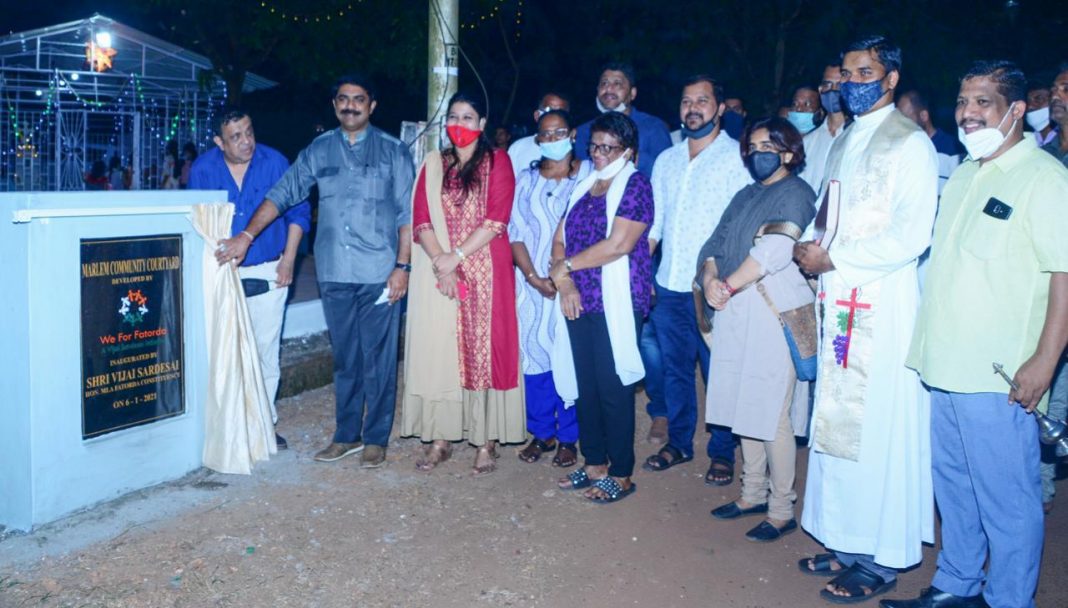 At the inauguration of the Marlem Community Courtyard on the occasion of the Feast of Epiphany or the Feast of 3 kings, Fatorda MLA and Goa Forward Party President Vijai Sardesai thanked the people of ward no. 9 for their co-operation in enabling him to develop the area around the Balwadi in Marlem. The Marlem Community Courtyard has been developed by We For Fatorda, a charitable trust initiative of Vijai Sardesai, into a modern day yet aesthetically Goan recreational area for the residents of the area.

Addressing the gathering Vijai said that this model of development of recreational and sports spaces has also been planned in other wards of Fatorda whereby within the next few days he will also be inaugurating a Joggers Park with an Outdoor Gym in Ward No. 4 in Chandrawaddo , a St Joseph Vaz Community Courtyard also in Chandrawaddo and other projects in other wards. He also said that sporting events and inter-ward tournaments promoting sport and youth will also be organized in every ward in the coming months.

Sardesai reminded the people of his commitment to all communities that when he was the TCP Minister he had got the SGPDA to earmark approximately 40,000 sq.mts. of land as Institutional Zone to enable the construction of St. Joaquim Church in Borda. He also spoke about various developmental projects that he completed during this current tenure as an MLA such as the underground electricity & underground sewerage network which has now been completed in 90% in the Marlem area and a fresh coat of tarmac which will be laid on all the roads of Borda that comprise the areas of Ward No. 7, 8, 9 and 10 in the coming week.

Vijai Sardesai told the audience that the Fatorda model was that of development by consent which actually meant Sabka Saath Sabka Vikas that needs to be replicated all over Goa unlike the Melaulim model where local elderly women are physically assaulted and trampled upon fir a mere demarcation as is happening in the tenure of the present Government. He said he was proud that he had never had to seek police protection for initiating or completing any development in Fatorda in his tenure of 9 years . He emphasised that the BJP couldn’t teach Fatordekars lessons in development but can only benefit from splitting people on the basis of caste and communities and pave the way for the Ganja party’s plan of clandestinely bringing in Cannabis cultivation in the state under the guise of medicinal use which will threaten the future of our next generations.

Sardesai urged Marlem residents and Bordekars in general to remain united and not get swayed by false promises of jobs which are election eve stunts that the ruling party is likely to stage . He lamented that the ruling party had to make a Helpline number to bridge the divide between the BJP and the people when he as MLA had a Helpline for the last 9 years that helped every individual bereft of political and religious affiliation in times of distress and emergency like during Covid times when Fatorda was the only constituency in Goa to provide a fully equipped Covid ambulance free of cost to the people .