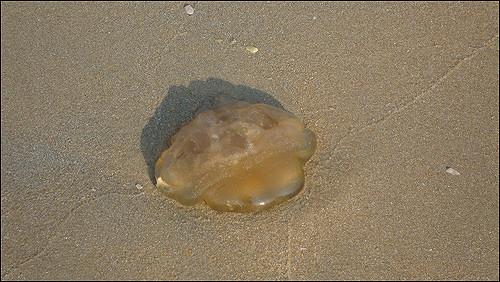 Baga: Drishti Marines  has issued an alert to the visitors after they spotted a cluster of Portuguese-Man-Of-War, a jelly like venomous marine organism on the beach of Baga.

“Drishti Marine lifeguards spotted a cluster of Portuguese-Man-Of-War, a jelly-like marine organism commonly known as Bluebottle or Floating Terror which washed ashore on Baga beach on August3, 2018,” a spokesman of the private agency, which has been deployed to man state’s beaches and waterfalls has said in a statement released.

The agency has said that the Bluebottle jelly-like marine organism spotted were less than an inch in size. “Drishti Marine have alerted the tourism department about the same,” the spokesman said.

Drishti Marines has adviced locals as well as the tourist not to venture into the sea on Baga beach as the Bluebottle could possibly be present in the waters or along the shoreline.

“Even wading into the waters is not advisable during the monsoon months as the sea and weather conditions are not favourable for swimming,” the spokesman said.

Drishti has said “ While most jellyfish stings are harmless to humans and cause only a mild irritation; species like Bluebottle are venomous and can cause harm on contact.”

“Even a dead Bluebottle washed up on shore can deliver a sting,” the agency has said.

Drishti Marine had adviced immediate first aid precautions that should be taken in case a person comes in contact with the bluebottle jellyfish.