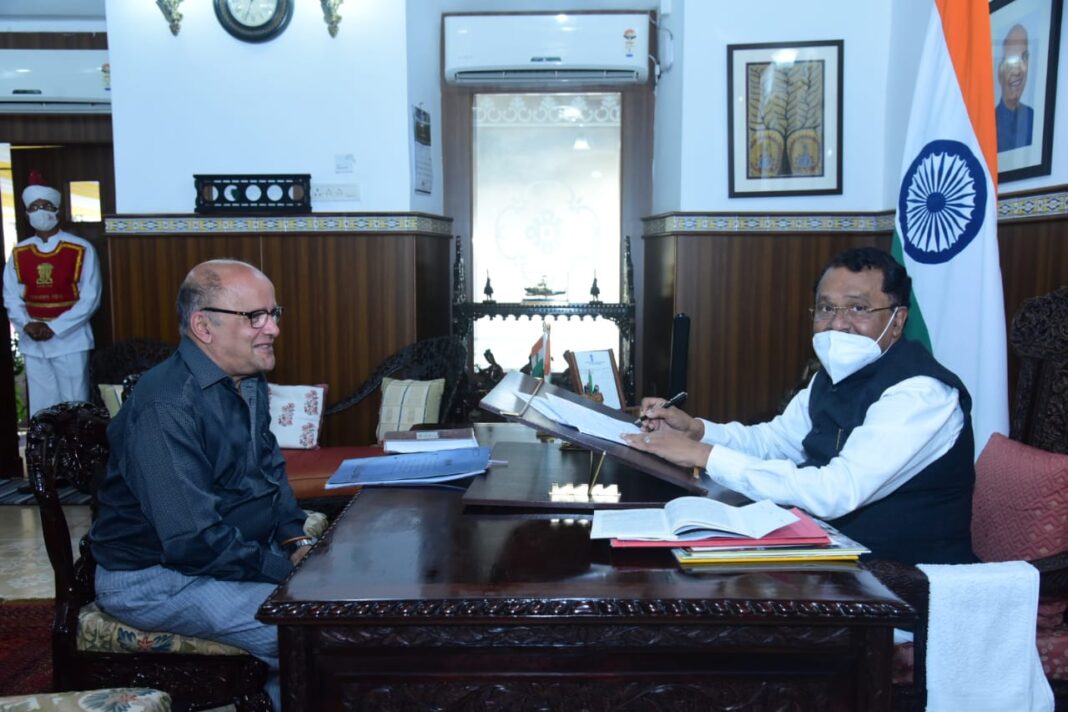 Adv. Aires Rodrigues today called on Goa Governor PS Sreedharan Pillai at Raj Bhavan and had further discussion with him on the Special Report sent last month by Goa Lokayukta Justice Ambadas Joshi over the decision of Chief Minister Pramod Sawant not to register an F.I.R against Cumbarjua BJP MLA Pandurang Madkaikar in the disproportionate assets case. Adv. Rodrigues had last Friday met Governor Pillai and sought his intervention in the matter.

Adv. Aires Rodrigues today drew Governor Pillai’s attention once again that that the Government by not registering the F.I.R as directed by the Lokayukta was in contempt of the Supreme Court’s judgment in the Lalita Kumari case which laid down the law on the issue of registration of an F.I.R.

Adv. Rodrigues also pointed out to the Governor that the Chief Minister declining to comply with the Lokayukta’s directive without giving any reasons or justification was unacceptable and untenable in law.

Adv. Rodrigues has expressed confidence that Governor Pillai would duly act on the Lokayukta’s report strictly in accordance with law.

In a Special report sent on 23rd June to the Governor under Section 16 (3) of the Lokayukta Act, the Lokayukta while seeking action as deemed appropriate drew the attention of the Governor that Chief Minister had not given reasons or justification for not accepting the report of the Lokayukta which had directed that an F.I.R be registered against Cumbarjua MLA Pandurang Madkaikar on the basis of the complaint filed by Adv. Aires Rodrigues in the disproportionate assets case.

While directing the Chief Secretary and the ACB to register an F.I.R against Pandurang Madkaikar, the then Lokayukta Justice P.K. Misra on 15th September last year in his 15 page order also observed that the then Chief Secretary Dharmendra Sharma and the former SP of Anti- Corruption Branch (ACB) Priyanka Kashyap had entirely failed in discharging their duty in accordance with law.

While stating that appropriate punishment was required to be imposed on SP Priyanka Kashyap, the Lokayukta directed that Suo Motu proceedings be initiated against her for gross dereliction of duty.

Justice Misra in his order while censuring then Chief Minister Manohar Parrikar and former Chief Secretary Dharmendra Sharma besides then SP of ACB Priyanka Kashyap for their mishandling of the disproportionate assets case against Pandurang Madkaikar had observed that they had shirked and shied away from their responsibility by not registering an F.I.R and not conducting an investigation against Pandurang Madkaikar.

After holding a preliminary inquiry into the complaint filed by Adv. Aires Rodrigues, the Lokayukta in his order held that reasonable grounds exist for conducting a detailed investigation while also observing that after going through all the material on record it could not be said that the complaint filed by Adv. Rodrigues against Pandurang Madkaikar was frivolous or vexatious.

Adv. Aires Rodrigues on 7th June 2018 had filed a complaint with the Lokayukta over the inaction of the ACB in probing the complaint filed by him against Pandurang Madkaikar. Pointing out that Pandurang Madkaikar’s Nikitasha Realtors Pvt Ltd had on 1st April 2017 inaugurated a huge palacial bungalow at Old Goa estimated to have cost around a whopping 200 crores, Adv. Aires Rodrigues in his complaint had demanded that the ACB register an FIR under Sections 13(1) (d) & (e) of the Prevention of Corruption Act 1988 and Section 120-B of Indian Penal Code against Pandurang Madkaikar and his wife Janita Madkaikar the Sarpanch of Old Goa and to speedily investigate the case.