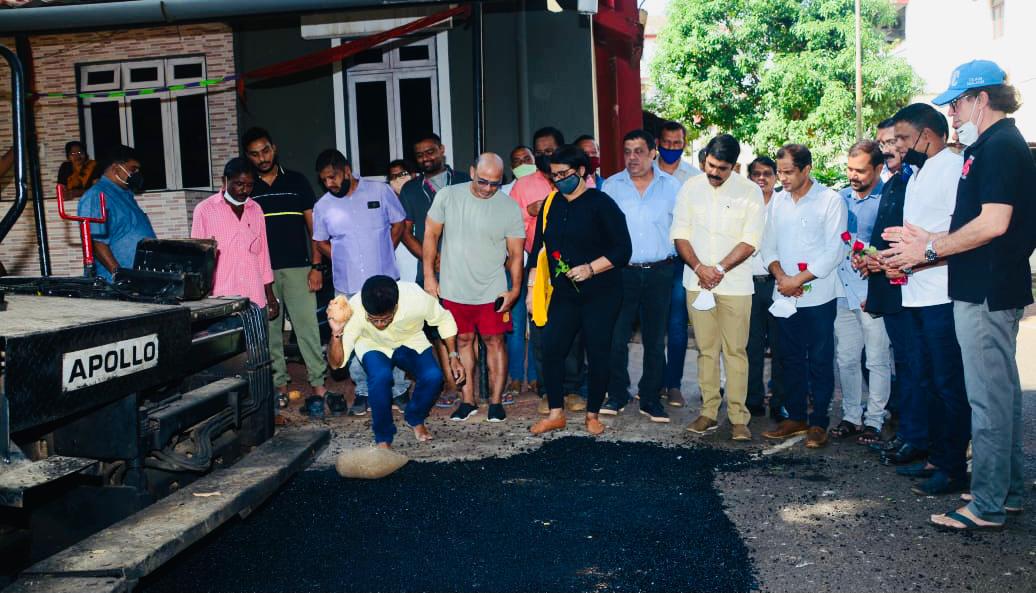 Lashing out against the BJP over several development issues, the Goa Forward Party President Vijai Sardesai hit out Chief Minister Pramod Sawant over his intentional oversight on Sonsoddo calling it an expected U-turn

Sardesai launched the inauguration of hot mixing works of internal roads across wards no 6, 8, 9 and 10 worth 4crores. Sardesai speaking to reporters said that, “the CM failed to hold the high-level Committee meeting on Sonsoddo, which he had assured on the floor of the Assembly, and now they have taken a U-turn on Sonsoddo and is asking the Municipality Administration to set up its own plant at Sonsoddo or decide contrary to the decision by an elected Council.This shows how incompetent and sly Pramod Sawant is, proving that he is not a capable leader but a dealer .”said Vijai.

The Chief Minister Pramod Sawant has always said River Mhadei is much more than a mother to him ,but he seems to have already sold Mhadei to Karnataka for 300cr that he is going to recieve through Delhi said Vijai.

Commenting on the developmental works, Sardesai highlighted that the government has been stopping developmental works which are done under CSR specially, which even include sports events. Vijai pointed out that “there are no visible and significant problems and no issues in Fatorda and that is why our opposition is confused and now using government machinery to stop our work.”

Taking further questions from the press about the declaration of his panel for the upcoming municipal elections, Sardesai said he will wait for court verdict on the issue. “We have challenged the reservation; hence we will wait for the verdict before we make announcement,” he said. Furthermore, Sardesai also stated that “the Goa Forward Party has identified good candidates, and the focus will be on giving a chance to 75% new faces.”

Questioned on a potential alliance with the Congress and the disqualification of the 10 MLAs, Sardesai said “the Goa Forward Party’s focus will be on uniting the opposition under Team Goa to keep Team BJP out of power. However, I understand as the Congress is a national party and it may require time to take certain decisions.” On disqualification issue of the 10 MLAs, Vijai Sardesai said “the Speaker has to give a verdict on it and cannot give reasons to avoid it. The Speaker only uses COVID as an excuse, but he must give justice and he is obliged to be the protector of 10th schedule of Constitution.”