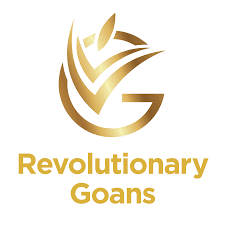 Panaji: Revolutionary Goans criticize the BJP government for being denied permission to hold a public meeting at Corgao, Pernem on Saturday. We have been applying for permission to hold public meetings at various places across Goa for the last two months but the BJP government is using its machinery to stop this peoples revolution.
The Founder of Revolutionary Goans, Manoj Parab pointed out that yet another meeting that was scheduled to be held on Sunday 21st Feb 2020 was denied permission by the Deputy Collector of Pernem. Application was Rejected after around 20 days two days before the meeting. This is the first time the BJP party is feeling the heat in North Goa as they fear of losing their vote bank to Revolutionary Goans.
“ All these years they have fooled the Goans in the name of religion and development but due to this revolution built up by us which is spreading an awareness about the rights of the person of Goan origin Goans have now become aware. Soon after the declaration of our political entry I got a notice from the Collector in which he has asked me to appear before the court on February 25 in externment case. Today, the old opposition’s like the Congress, BJP, MGP and others looks very weak and people have lost faith in their leaders, so now majority of the Goans are looking for a better option and for them RG is the only hope now. Goans of all ages and religion are joining Revolutionary Goans in big numbers and this has created a great fear in the minds of all the political parties especially the BJP-led government,” said Manoj.
“Looking at the complaints and harassment done by the BJP government we are quite sure that we have made a big impact in the political arena of Goa. Revolutionary Goans is the only opposition and they are trying hard to suppress our voices and stop this revolution by misusing government machinery against us,” he added.