Mahanand’s parole cancelled on the  request of Savera NGO: IGP 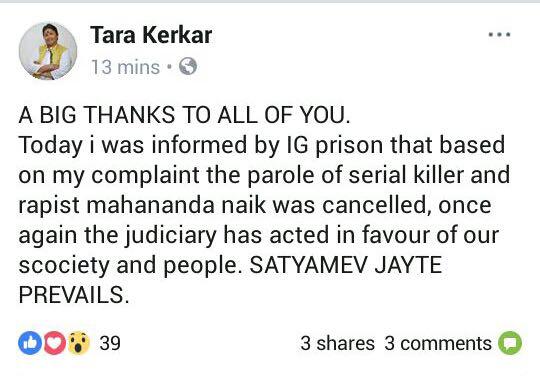 Panaji: Inspector General of Prisons has informed Savera NGO that the parole granted to murder convict Mahanand Naik was cancelled because of their request, the NGO has claimed.

Savera Chief Tara Kerkar in a Facebook post has said that she was informed by Inspector General of Prisons that based on her complaint, the parole granted to Mahanand Naik was cancelled.

This is what she posted on her FB account: A big thanks to all of you. Today I was informed by IG prison that based on my complaint, the parole of serial killer and rapist Mahanand Naik was cancelled. Once again the judiciary has acted in favour of our society and people. Satyamev Jayte Prevails.

Previous articleCongress spreads misinformation, which needs to be tackled during LS polls: Parrikar
Next articleGF supports amendment to TCP act, says its done with Goa at heart