Panaji: With the Christmas festivities are in the air, Goa Traffic Police on Tuesday adopted an unique way of educating traffic violators in the capital city.

Dressed as Santa Claus, the traffic police constables had spread across the Panaji city, distributing chocolates to the traffic violators. 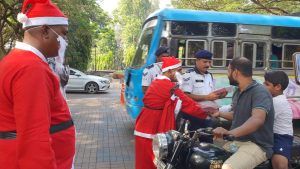 “It was not just about distributing chocolates. We stopped all the violators the educated them about their safety. We used this occasion to spread the message in our own way,” Panaji Traffic Police Inspector Brandon D’Souza said.

He said that majority of the two-wheeler riders were found to be wearing helmet without mandatory ISI mark, some of them had not put on the straps of helmet, many couple were found carrying two children on their bike and in several cases, the four-wheeler driver had not put on his seat belt.

“All this is required for safety of the riders or drivers. We stopped them and educated about the traffic safety,” he said. 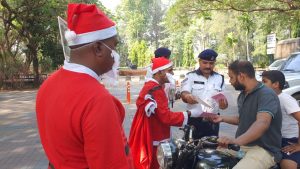 Goa with more than 27 per cent of its population following Christian faith is gearing up to celebrate Christmas festivities on Wednesday.

“We are thankful for traffic police to adopt such unique way of educating people. This is a right way to convey message,” said one of  the rider, who was stopped for not putting on strap of her helmet near Kala Academy in Panaji city.

She also thanked traffic police as “when people are busy ushering in festivities, policemen are busy in their duty to save the lives.”

Previous articleChristmas season looks dull in Goa, thanks to CAA protests
Next articleBJP to hold mega pro-CAA rally in Panaji on Jan 3