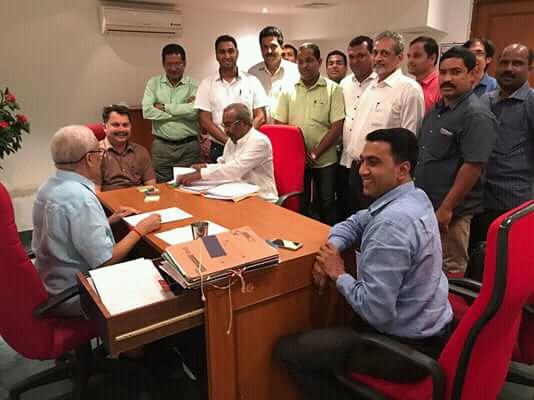 Porvorim: The issue about proposed amendment to the mining act which can help resumption of the iron ore extraction activity in the State would be taken up before central Group of Ministers formed by Prime Minister Narendra Modi, Chief Minister Manohar Parrikar told the mining dependents today.

A delegation of mining dependents today met Parrikar at his chamber at Porvorim requesting him to pass a resolution on the floor of the House during ongoing State legislative assembly. The mining dependents have said that the state assembly should request Parliament to amend The Goa, Daman and Diu Mining Concessions (Abolition and Declaration as Mining Leases) Act, 1987.

“The Chief minister has said that the issue would be taken up before Group of Ministers formed by the Prime minister. Parrikar will travel to Delhi either on August 4 or August 6 during which he will meet the Group of Ministers and discuss this issue,” Puti Gaonkar, President, Goa Mining People’s Front (GMPF) told reporters after meeting the CM.

Gaonkar said that the solution for the  current crisis on the mining industry can be worked out only after amending The Goa, Daman and Diu Mining Concessions (Abolition and Declaration as Mining Leases) Act, 1987 which will prolong the life of leases till the year 2037.

“CM has said that the issue would be discussed during ongoing assembly session either through Calling Attention motion or a resolution,” he said.

During the meeting, Gaonkar said, the chief minister asked the mining dependents to approach Congress leaders in Delhi for their support in the parliament, when amendment to the act would be moved.

“We told the CM that we have already met Congress President Rahul Gandhi who has assured support to us,” he said.

The mining industry in the State has come to halt since March 16, this year after Supreme Court through its order dated February 07 quashed 88 mining leases.