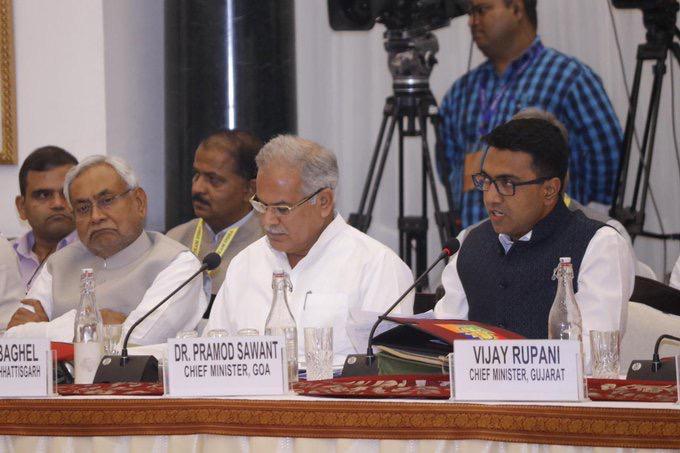 New Delhi: During his first ever presentation before NITI Ayog,  Goa chief minister Pramod Sawant stressed on rainwater harvesting and water conservation as thrust areas for his government.

Sawant attended the meeting of NITI Ayog on Saturday which was chaired by Prime Minister Narendra Modi in New Delhi. This was his first ever presentation before the body after he took over as the chief minister in March this year following demise of Manohar Parrikar.

“I spoke about government’s commitment towards water conservation by increasing the number of bandharas (check dams) and through other rainwater harvesting measures,” Sawant said in a statement released here on Saturday night.

“Also spoke about the importance of Mahadayi river dispute resolution for the state,” he added.

The chief minister had announced that state will construct at least 200-300 check dams within a year and also will use abandoned mining pits for rainwater harvesting.

After the NITI Ayog meeting, the official twitter handler of the financial body tweeted “ The rainwater harvesting is a major focus area in Goa. The state has focused on the blue revolution and is in the process of formulating a community farming policy. #Goa CM @DrPramodPSawant at #FifthGCM.

The chief minister in his presentation before NITI Ayog also stressed on early resumption of mining activity in the State which has come to standstill after Supreme court quashed 88 mining leases.

Sawant said that he emphasized on early resumption of mining and also on completion of Mopa International Airport, which is taking shape in North Goa.

The airport is a Greenfield project whose first phase is expected to be commissioned in the year 2020.