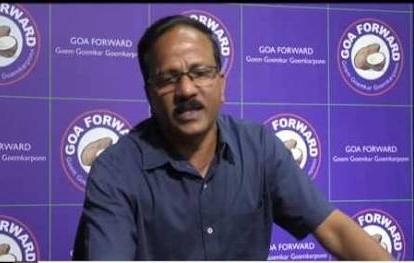 Panaji: Goa Forward Party’s General Secretary Prashant Naik has launched scathing attack on Goa Pradesh Congress Committee President Girish Chodankar over his silence on the SEZ scam. Naik said that Girish was silent as he wants South Goa ticket of his party, which is usually given to a leader from minority community.

“Outside assembly Girish who is vocal why is he silent? Is he searching for South Goa ticket of Congress?,” Naik questioned.

“Where all these years congress gave candidate from minority community, at that place Girish wants to contest? Is this a kind of settlement by Girish for the sake of ticket?.,” he went on.

“Is he benefitting from SEZ? Why is he silent? Every second day he addresses a press conference, but now has not uttered a single word. This is the question which congress has to answer for the people of Goa,” he said.

“Three main SEZ scam guys were got scot free. They should have been celebrating in the assembly. Lungi wala (referring to Chellakumar) should also be happy and they should do lungi dance in the assembly,” GF party leader said.

“Why is congress silent now? Why there is no noise on this issue. These are the questions which congress needs to answer for the people of Goa,” he said.

Referring to the objection raised for amending TCP act by Congress yesterday on the floor of the House, Naik said that such an amendment was required to ensure that injustice meted out to Goans should have been cleared.

The land which was shown as settlement in RP 2001 was shown as green in 2021, pushing people to great difficulty, he said.

“There was no option for these people. It was sheer mistake on the part of then government to do so. The current amendment to TCP Act is to save people from facing agony,” he said.

Referring to the TDR, Naik said in rural Goa, there are so many orchard and forest lands. “Why not give them some benefits for keeping the land green. The land title and possession would remain with them. If Goans are benefitted why Congress is upset?,” he questioned.