Does Manoj Parab have it in him to stir Revolution 2.0 in Goa? 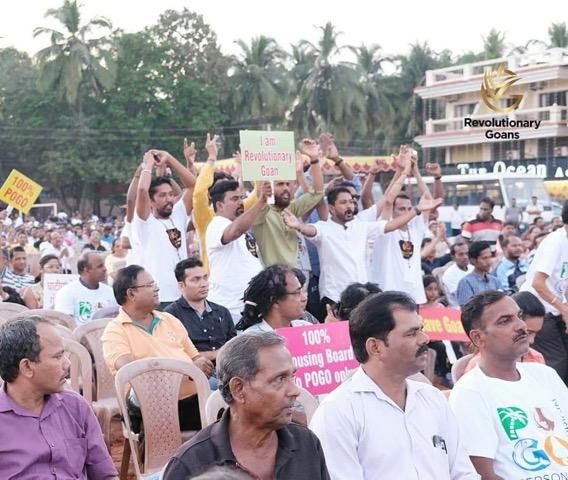 [34-year-old, Manoj Parab, sounded promising as he addressed thousands of crowd sitting at Dando Ground in Benaulim on Sunday evening. The movement to my mind looked significant as Goa will celebrate its 58th Liberation Day on December 19th.]

At the time when India’s North and South are burning with anger and agitation against Citizenship Amendment Act 2019, in Goa, Revolutionary Goans managed to pull a crowd of over 4,000 people for their first POGO rally. The movement had a significance of its own. Firstly, it was in the constituency of veteran and aced politician Churchill Alemao and secondly, the bugle of the movement roared from the south, the place which has witnessed many game-changing activities in the past.

Well, to begin with, it was no secret that Revolutionary Goans headed by Manoj Parab were planning their POGO rally from a long time now. Their fight to define Person of Goan Origin was dismissed by the legislators when their bill found almost no place in the last monsoon assembly session. Parab says such rallies are the medium to galvanise the movement. ‘How else would I tell the people about the POGO bill’ he says.

34-year-old, Parab, sounded promising as he addressed the thousands of crowd sitting at Dando Ground in Benaulim on Sunday evening. The movement to my mind looked significant as Goa will celebrate its 58th Liberation Day on December 19th. The last few years have been mildly wobbly when it came to political performance. The whole horse-trading that was seen recently may have not gone too well with the public. The larger sense in the masses is that public opinion have become a thing of the past and their grudges have hardly been considered by those in power.

CAN PARAB PROVE TO BE A NEW FACE IN POLITICS?

I looked at the Revolutionary Goans website that still claims it to be a non-political organization. During my interactions with Manoj, he did not reveal much about his plans either but at Dando Ground, he promised never to align with any political party in the future and that to me, gave away their plans to perhaps enter the political fray and why not. The young leaders as they must face the people’s test. After all, for how long will the activism last anyway?

IS POGO RELEVANT OR CONSTITUTIONALLY VALID?

Well, if BJP government can push for NRC on defining Indian nationality based on 1971 at the national level then Parab’s definition to define Person of Goan origin makes absolute sense. The POGO bill tries to define Goan (as a person who’s either of the parents or grandparents were born in Goa or habitat of Goa before 20th December 1961.)

The man at the helm says he is just trying to protect the rights and privileges of the Niz Goenkars in terms of jobs, land and other government benefits irrespective of any biases. If Andhra can ensure 80% of Private Jobs reservation to the son and daughter of the state, then what stops the Goa government?

Plus, anyone who knows understands the grassroots problem in Goa today would know the dire consequences of its demographic changes. Fact is, many youngsters have to move out of the state for better opportunities because of our structural issues. To think of it, we are losing young minds to other states and countries and that’s the reality. How would we stop that?

No doubt the betrayal of past politicians will haunt even in the present but then what about the opportunity for the new faces? Today, Goa stands at 34% of unemployment ratio- probably highest in the country (based on media reports). The lands encroached by slum dwellers is another concerning issue. Our state tops the list of maximum slums – leaving behind states like Bihar, Jharkhand, Maharashtra and Uttar Pradesh (based on media reports). These issues are interconnected if one gives a thought. You may dismiss a man but can we dismiss his ideas and the consequence of the issues if ignored now. Perhaps, thought should be given by everyone who claims the love for their state.