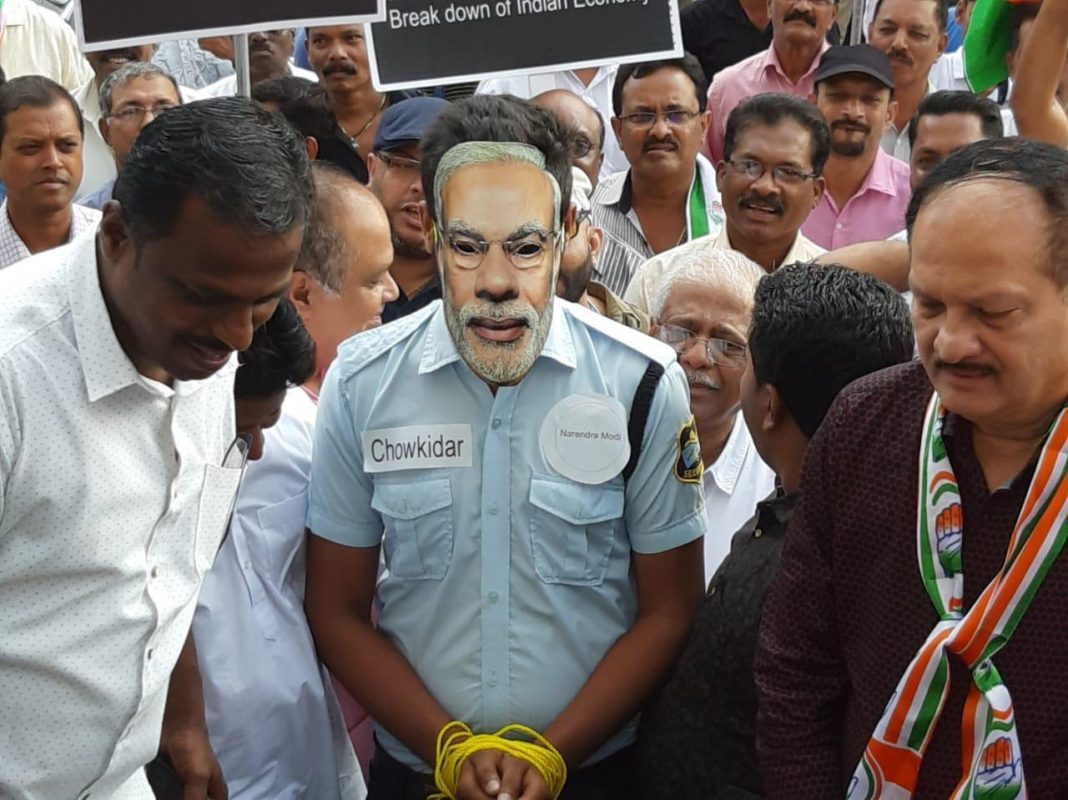 The group staged a protest against the failure of demonetization in front of the Reserve Bank of India office at Patto near Panaji. Hundreds of Congress workers participated in the protest which lasted for over an hour.

Chanting slogans of ‘chowkidaar chor hein’, the Congress workers paraded a dummy of a chowkidar wearing a Modi mask. They later tried to push the dummy ‘chowkiar’ into one of the waiting police vans and shut the doors behind him, but were prevented by the police.

Several senior GPCC leaders including former CM and Lok Sabha MP Francisco Sardinha later on spoke to the media after the protest. “Demonetization was the biggest blunder of the Modi government. It was designed to benefit only the BJP and its senior leaders. Millions of poor Indians were inconvenienced due to demonetization, but there were zero benefits,” said Sardinha.

District President Vijay Bhike told the media that inflation in the country is at an all time high – an indicator that the policies of the Modi-led BJP government have totally failed. Congress leader M K Shaikh said that the economy is in a downward spiral while NPAs have shot skywards.

Mahila Congress President Pratima Coutinho said the prices of petrol and diesel as well as essential commodities are going up on a daily basis. Cooking gas prices are at an all time high, burdening the housewife like never before.

Youth President Varad Mardolkar said the government claimed that Black Money would be eliminated, but not a single paisa of Black Money has come back into the system or returned to the country from abroad.

The Congress protesters attempted to break the police cordon and march up to the RBI office. However, they were stopped from going further by a heavy police contingent stationed outside the venue. The police were armed with automatic weapons and equipped with tear gas, in case the protesters turned violent. The Congress leaders met with senior RBI officials who met the protesters and explained their inability to do anything in the matter.

Previous articleAbsent Govt present only for Casinos: AAP
Next articleTwo foreign Nationals of Uganda and Nigeria booked for illegal stay by Calangute police