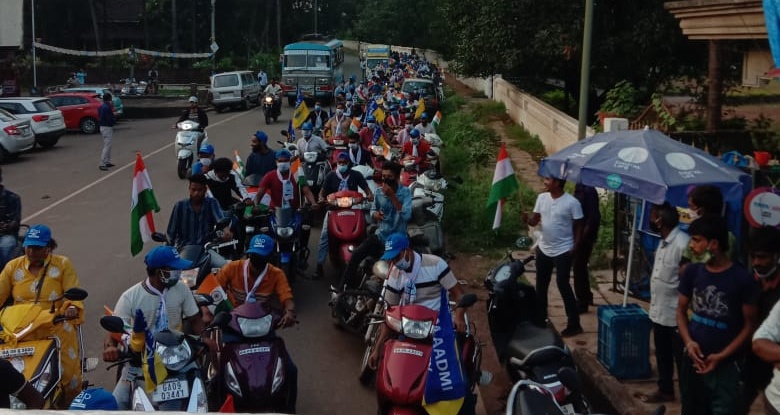 The residents of Curchorem showed great enthusiasm to the Aam Aadmi Party ‘Rozgar Yatra’, and turned up in large numbers to participate. The Yatra had AAP volunteers take a tour of the constituency and large Booth level meetings took place. 100s of residents of Curchorem registered for Kejriwal’s Job Guarantee.

Curchorem residents are tired of seeing their youth suffer due to Unemployment. They feel that the constituency has been largely ignored by everyone in power especially Nilesh Cabral the Power Minister. The constituency which is situated close to the mining routes area has been greatly affect by the closure of mining. Many Garages and other allied businesses used to flourish in the area due to this but now residents don’t have much support. The youth are upset as there are no alternative jobs. The government has not made any effort to come out of this situation. The sitting MLA, Nilesh Cabral has not helped in anyway, instead has hiked electrical tariffs throughout the state. To add to that, he ordered the electrical connections to be cut of those who had not paid their bills. With the Covid-19 crisis the people have suffered very badly.

James Fernandes,Joint Secretary, AAP Goa said “Kejriwal said that every youth will be given employment after the formation of the AAP government and till the employment is not provided, one youth of every family will be given RS 3,000 per month. He announced that 80 percent of jobs in the private sector will be reserved for the youth of Goa. Rs 5,000 would be provided monthly to families who lost employment due to shutdown of tourism and mining. These are things that the residents of Curchorem need immediately.

‘Arvind Kejriwal is person who does what he says. AAP will change the employment scenario. When AAP restarts mining allied businesses like garages can restart.The AAP Government will further establish a Skill University in Goa on the lines of Delhi’s DSEU. AAP will bring an end to nepotism in government jobs in Goa and the jobs will be made available to the common man” said Gabriel Fernandes, AAP Curchorem Assembly incharge