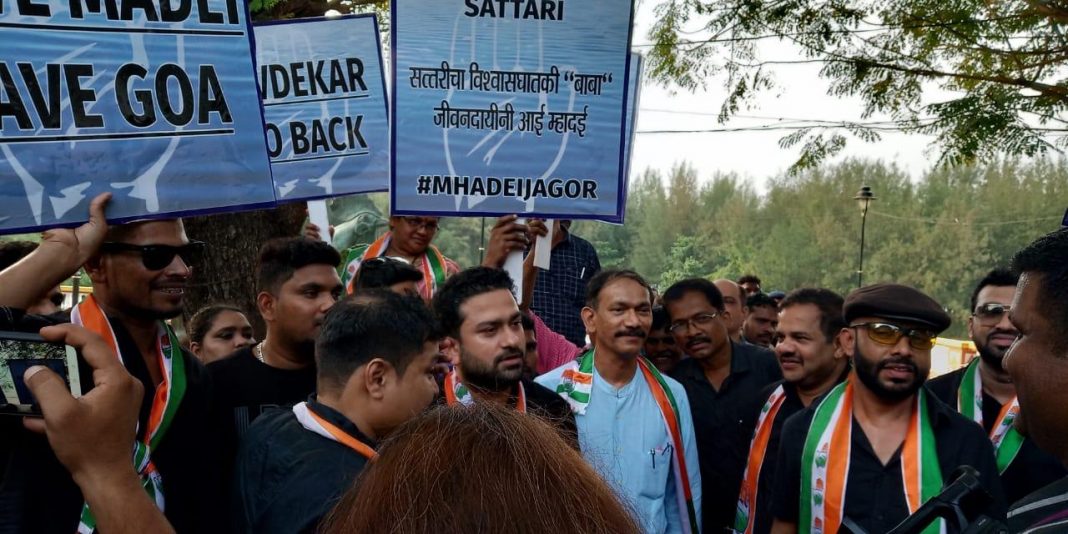 Bambolim: Three different protests including one inside the IFFI inaugural venue were reported during the day today as Opposition parties tried to mount pressure on the centre to withdraw consent given to Karnataka for a water diversion project on River Mahadayi.

Union Environment Minister Prakash Javadekar was present in the State in his capacity as Information and Broadcasting minister during which the protests happened.

A group of Congress workers shouted slogans inside the IFFI venue on Wednesday evening when Javadekar had got up to present his speech as the chief guest.

Superstars Amitabh Bachahan and Rajanikant were also present during the function when incident happened.

All the Congress workers were whisked away from the venue and later taken into custody by local police even as Congress Chief Girish Chodankar led another protest outside Entertainment Society of Goa venue during the same time.

Several Congress workers protested outside ESG venue demanding that union government should withdraw the exemption of Environment Clearance given to Karnataka for water diversion project on Mahadayi river.

Chodankar said that the centre has taken Goa for granted and is playing with the lives of the people in the state.

The leaders including PFG’s Hrudaynath Shirodkar, Mahesh Mhambre and GFP’s Durgadas Kamat and Santosh Sawant were arrested by police and taken to the police station in North Goa’s Bicholim area.

The protests happened despite attempts made by Javadekar before IFFI inaugural function to broker peace with the agitators.

“The minister failed to give us satisfactory reply. He wanted additional 15 days to respond to our demand to withdraw letter given to Karnataka,” said Kamat.

All party delegation from Goa had met Javadekar on November 4 in New Delhi demanding that the letter given to Karnataka be withdrawn.

On November 18, Javadekar had written to Goa government informing that a committee has been formed to review the letter.