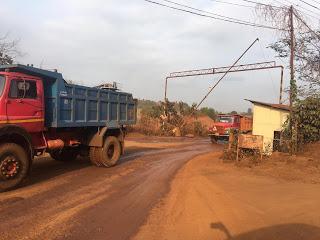 Panaji: Chief Minister Manohar Parrikar today held meeting with the senior government officials and other stakeholders on Thursday to explore possible options to resume mining industry in the State, his office said.

“Chief Minister @manoharparrikar holds immediate meetings with senior government officials and other stakeholders to explore all possible options to resume mining operations in Goa at the earliest,” Chief Minister’s Office tweeted this evening.

The mining industry in Goa has come to a standstill due to Supreme Court order on February 07, 2018 which has quashed 88 mining leases. Goa Mining People’s Front, an umbrella organization of the people dependent on this industry, has claimed that the closure has affected three lakh people in the State.

Parrikar had written letter to the union government on September 26, 2018 when he was admitted in All India Institute of Medical Sciences (AIIMS) New Delhi seeking a legislative means to resolve the crisis.

The Chief Minister had suggested that the Parliament should move an Ordinance amending existing Mining Laws to give new lease of life to the iron ore leases in the State.