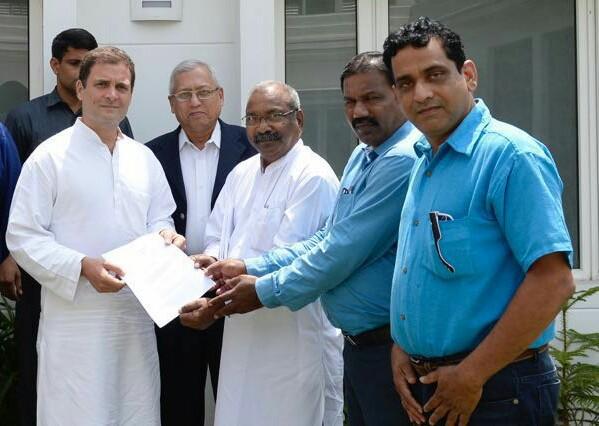 New Delhi:The people dependent on mining industry today met Congress President Rahul Gandhi in New Delhi today demanding his party’s support in the Parliament, if amendment to the existing law is moved to pave way for resumption of the activity.

“We have given memorandum to almost all the legislators in Goa. They have been requested to pass a resolution on the floor of the House during upcoming Assembly Session urging the centre to amend Goa Daman and Diu mining Concession Abolition Act,” Gaonkar said.

He said that once the resolution is moved, the amendment would be placed in the Parliament for which we need support of even opposition party. “That is why we had gone to meet Gandhi who has assured to discuss the issue with his party legislators from Goa,” he added.

Gaonkar said that Gandhi told the delegation that the Congress legislators from Goa would be meeting him during first week of August. “Gandhi specifically said that he would discuss the issue with them,” the leader added.

The GMPF delegation also met Union Labour Minister Santosh Kumar Gangwar with the demand to stop the mining companies from retrenching the staff. Union AYUSH minister Shripad Naik was present for the meeting with Gangwar.

“Gangwar told us that the issue of retrenchment of the mining staff should be taken up with the State government. He also assured to talk to Goa government to save the mining workers from losing job,” he said.

Previous articlePratima Coutinho’s lies exposed, she should tender apology: Shiv Sena
Next articleSGDPA Chairperson asks FDA to conduct regular check on all consumables in their market