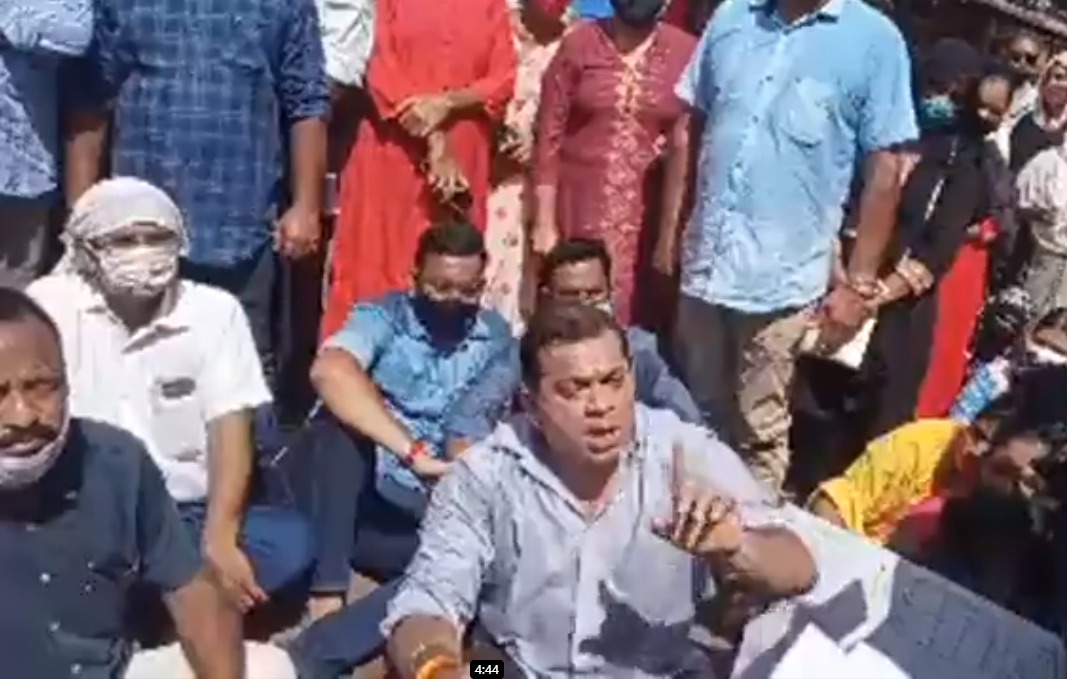 Porvorim: Hundred of Porvorim people led by local MLA Rohan Khaunte on Wednesday marched to Public Work Department’s office at Porvorim demanding solution for the vexed issue of acute water shortage faced by the constituency during last one and half year. 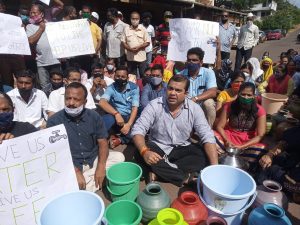 The people carried empty vessels with them, symbolically to showcase how the taps have run completely dry in their constituency, while they have to buy the water from tanker mafia.

While the protestors, a mix of men and women, marched towards the PWD office, they were physically pushed back by Police Inspector Porvorim Ninad Deulkar and other male constable. After the skirmish, the Chief Engineer of PWD assured to solve the water shortage within seven days. 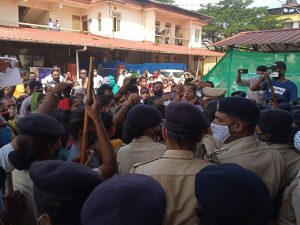 Khaunte pointed out that an influential tanker mafia was the reason behind artificial shortage of water to Porvorim constituency. He said that he had been buying water to the people of the constituency, personally.

He said that the PWD tankers which were supplying water to the people have stopped doing so citing some SOP issued by the government.

The MLA alleged that the water has been smuggled to five star hotels leaving citizens in dire straits.

“People are struggling here as they had to go without potable water on Diwali Day,” he said. 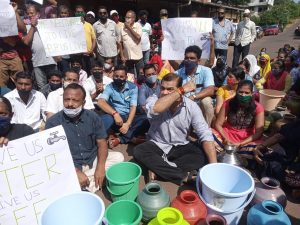 Khaunte said that Assistant Engineer and Junior Engineer have been non responsive to the requests of fixing the water issue, despite several representations made by local representatives.

He said that while taps run dry, there is wastage of water at few points due to breakage of the pipeline. “The lower rung staff complaint that there is no vehicle provided to them by the department and they insist that we should carry them to the spot,” he said.

Khaunte said that he had also approached PWD Minister Deepak Pauskar, last week, seeking his attention towards the issue, but has not received any response.

The MLA said that PWD was busy disconnecting the connections of the people on the pretext of non payment of the Bills.

Khaunte said that Chief Engineer has assured to fix the issues within seven days, failing which all the local representatives will walk to PWD Porvorim to lock the office.

Meanwhile, Khaunte has said that they will continue protests outside CM residence and SP office demanding action against the PI and the constable who pushed women in the crowd.

He said that the visuals of policemen pushing the women from the group would be made viral to ensure that the protesting women gets the justice.

Previous articleHotels to designate one room each for Isolation, new SOPs for tourist season to be issued: Vishwajit Rane
Next articleFormer Goa Guv Mridula Sinha is no more