Goa will not bow down to the threats from within or outside the State over fish: Sardesai 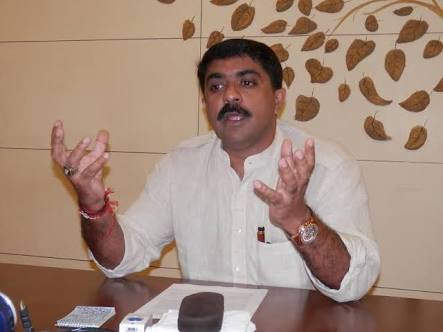 Panaji: Goa Forward Party Chief and Agriculture Minister Vijai Sardesai today said that state will not bow down to the pressures from politicians from neighbouring Maharashtra over Fish testing issue, as the matter is pertaining to “providing highest standard of food to the population.”

“We cannot be deterred by threats of pressure tactics from anybody whether within the State or outside,” Sardesai said.

Sardesai was reacting to the statement by Maharashtra MLA Nitesh Rane who had threatened not to allow Goa registration vehicles in Sindhudurg District, if Goa Food and Drugs Administration continue stopping the fish carrying vehicles from areas like Devgad and Ratnagiri to Margao .

Goa FDA has made it mandatory for all the fish traders to have licence failing which they are not allowed to import the product (fish) in the State. The step is taken following fear of formalin presence in fish being expressed by locals.

“ People of Goa aspire to a higher standard of quality. The aspiration of the people of Goa is to be respected by the State government,” Sardesai said.

“We, in Goa are suppose to have the best quality of life  according to the national commission for population. So, when the socio politically conscious citizenry of Goa demands highest standard of probity for food.. Higher safety standard for food, We have to oblige  them with the regulatory mechanism,” the minister said pointing out to the checks by FDA at the state borders.

“The regulatory mechanism is now in the place.  We cannot be deterred by threats or pressure tactics from anybody whether within the state or outside the state,” he said.

Giving an example, Sardesai said when world famous Alfonso Mango is exported from Sindhudurg to the Europe, will the people from Konkan protest, against European Union’s  demand for these mangoes to go through quality test?

“Will the people from these areas of Konkan say that they will beat up Britishers or people in the European Union?,” he questioned.

Sardesai said that  Goa is developing as a premium tourism destination and our people demand we have to have higher standard of quality control.

The minister said that as far as matter of FDA checks is concerned, it is the step taken by Goa Health Minister Vishwajit Rane,  who seems to have taken a very proactive decision.

“We have to regain the faith and confidence of the people of Goa. Fish is a staple diet and we cannot have a panic or fear,” he said.

Sardesai said that the state government is aware that due to the stringent rules by FDA some people are getting troubled and  certain business interest are also  getting harmed.

“But one cannot do anything about it. One has to comply with the regulatory mechanism. They will have to comply with regulations in place and continue your trade,” he said.