CHURCH VS BJP ON CAA-NRC, ARCHBISHOP PUTS SAWANT GOVT IN A TOUGH SPOT    By Deepali Desai 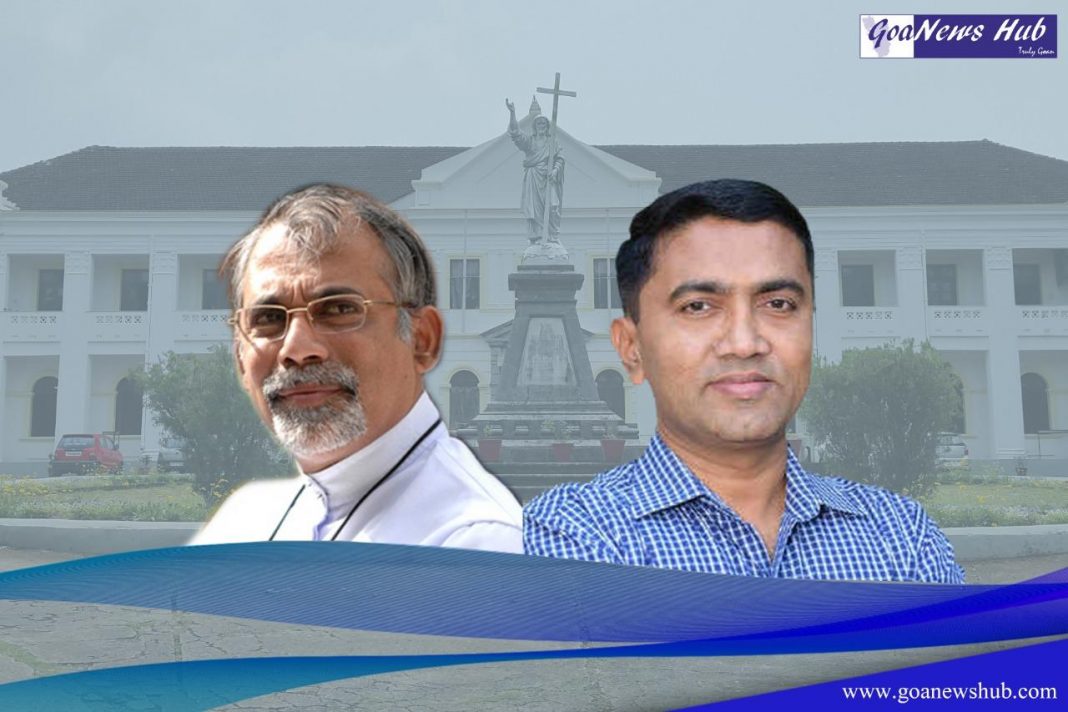 The functioning of the current BJP government is very different from the times of Late Atal Bihari Vajpayee and Manohar Parrikar. I remember, when Manohar Parrikar was the Chief Minister of Goa, he would always consider the Church as the crucial stakeholder while handling key political decisions. Now, as the Archbishop calls the CAA, the NRC and the NPR ‘divisive and discriminatory’, it puts Sawant led BJP Govt and its 15 MLAs in a tough spot. Let’s analyse

In the past few months, India has witnessed massive protests against the Citizenship Amendment Act. The act that leaves out Muslims from seeking refuge in India has come under massive criticism. Many protesters argue the exclusion that goes against the secular and democratic fabric of India.

And while millions of citizens are out on streets in various parts of the country, in Goa we could see Central party leadership sending their top leaders to drive the campaign on CAA. The magnitude of the pro-CAA march was also widely advertised by the BJP.

Now, just when the Sawant Govt was taking credit for moving the first congratulatory motion on CAA in the Assembly, Archbishop Filipe Néri Ferrão has expressed his serious reservations on the CA Act appealing the ruling BJP government to “immediately and unconditionally revoke the CAA and desist from implementing the NRC and the NPR.”

He said, “such exercises will result in a direct victimisation of the underprivileged classes, particularly the Dalits, the Adivasis, the migrant labourers, the nomadic communities and the countless undocumented people, who, after having been recognized as worthy citizens and voters for more than seventy years in this great nation, will suddenly run the risk of becoming stateless and candidates for detention camps.”

The remarks as strong as that also mentioned that the “Christians in India have always been a peace-loving community and deeply committed to the ideals of justice, liberty, equality and fraternity, enshrined in the Constitution of India.”

Now, it’s needless to say that Archbishop holds the influential position in Goan society. The strong message will have some impact on the Christian community but more than that it further puts the 15 Christian MLAs within the BJP in a sensitive position. At a time when the Centre looks adamant on CAA, back home what stand these 15 MLAs take is something that is to watch out for.

While the Central Government has time and again mentioned that CAA has nothing to do with the citizens of India, the famous statement on ‘chronology’ leading to NRC by Shah still rings in many ears. At first, the NRC was only to be carried out in Assam to weed out illegal Bangladeshi migrants but then when it was announced that NRC will be carried out nationwide- was a trigger to the protests in many parts.

Even when Prime Minister Narendra Modi tried to clarify on the matter, it did very little difference to the protesters. The contradictory statements within the BJP leading up to Jharkhand and Delhi elections also fuelled the anger. The poll debacle is also visible after  Delhi election result.

The barbaric attitude towards the protesters in Delhi cannot be overlooked too. The violence perpetrated towards the students of Jamia Milia Islamia, Jawaharlal Nehru University (JNU) and Aligarh Muslim University (AMU) looked tactical move, further fuelling the debate on whether minorities were at the aim of the target.

IN CONTEXT OF GOA

Let’s understand, Goa cannot be compared to the states like Assam where the issue of Bangladeshi migrants is at the centre of politics, neither can it be compared to any other northern states. Our issues are different. Hence now the pressure and the onus is on state BJP government to either convince the Church authority or resist the opposition. Either of the consequence impacts the BJP politically.

According to the 2011 census, 27% of the population in Goa are Christian, while 66% are Hindu. But Christian MLAs makes over 50% of representation in the ruling BJP. This changes the whole equation.

Chief Minister Pramod Sawant is scheduled to meet Archbishop Filipe Néri Ferrão this week. The power game is something to watch out for.