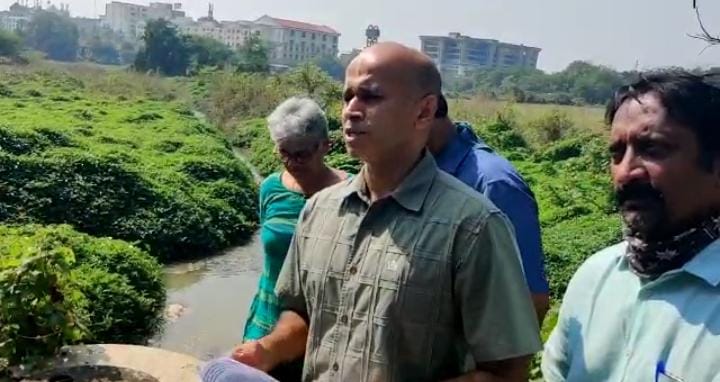 Panaji: Calling it an ‘official, political roadshow of BJP General Secretary Damu Naik and Minister Deepak Pauskar United Goans Foundation (UGF) stated that they are trying to trivialize the hard work of UGF in bringing the administration to task and also interfering in the working of the administration.

“People of Fatorda should know how and why did the PWD Minister and former local MLA (current BJP General Secretary) wake up after 6 years to ‘inspect’ behind on the said sewage leak which has not been attended for more than 6 years. The sewage has been flowing through the opposite cultivable fields (poisoning them and the ground water below) and then flowing along the SGPDA Market, Colva Road into River Sal. The ground water contamination is massive and its due to this that the stench emanates all along the Old Market Area,” UGF stated slamming.

“PWD Minister Deepak Pauskar (rather than his hogwash visit with Damu Naik in tow) should have checked his own Department and found out that GSPCB had already been petitioned by United Goans Foundation in January 2020 as a result of which inspection was carried out, showcause notices were issued to Sewerage and Infrastructure Development Corporation of Goa, the Chief Officer MMC as well as Executive Engineer PWD WD 21 and which were later followed up by Notices under Section 33(A) of the Water Act 1974 and 31(A) of the Air Act 1981. The show cause issued to MD SIDCGL also mentioned a fine of Rs 10 lacs,” it further stated.

“What is even more appalling is that even after being elected twice the current Fatorda MLA and Ex TCP Minister Vijai Sardessai who claims to be the guardian of all development in the region hasn’t found the time to attend to this problem. The much-hyped earlier trips by Late CM Manohar Parrikar hasn’t shown any results too. This careful avoidance of solving this problem arises from the fact that both Damu Naik and Vijay Sardessai as MLAs and de facto SGPDA members had overseen grant of permissions to the neighbouring high rise buildings without necessary sewerage infrastructure. This attempt to kill those paddy fields is an ulterior plan to make these fields unusable and convert it into real estate too,” UGF stated in the press note.

“In October 2020, The EE of PWD 21 had even informed GSPCB that due to Covid pandemic the issue would be attended to by December 2020. Till date this problem hasn’t been attended to. The EE knowing well that the same has to be attended to now as time has elapsed, very cleverly invited PWD Minister, the former MLA & Fatorda aspirant Damu Naik and his entourage to highlight the issue and show that it would be solved post their intervention,” it stated.

The UGF warned the local EE PWD, MD SIDCGL and CO MMC besides GSPCB that if the issue is not resolved within the next 10 days (January 21), we will be filing criminal complaints against all the above and make sure that each one pays for the massive environmental destruction.

Previous articleMES HS school principal awarded for outstanding contribution towards society
Next articleResolution by all 40 MLAs against coal handling will put end to problems: Churchill