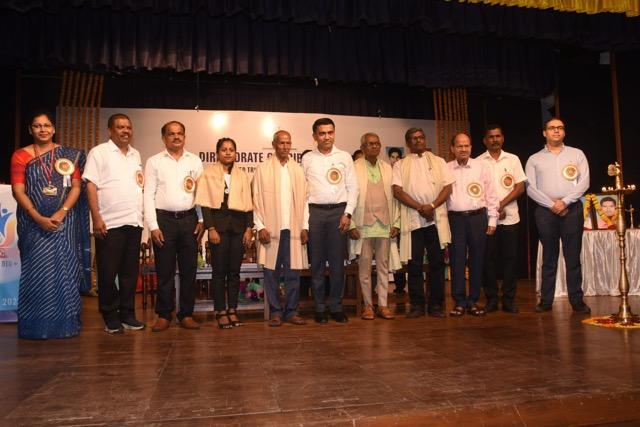 The Chief Minister and Minister for Tribal Welfare, Dr Pramod Sawant assured the members from the Tribal community of giving them land dwellers rights under the Forest Right Act. The Chief Minister was speaking at the ‘Prerana Din’ function organised by the Tribal Welfare Department at Institute Menezes Braganza, Panaji, today.
Present on the occasion were MLA of Sanvordem Constituency, Shri Ganesh Gaonkar, MLA of Cortalim Constituency, Shri Antonio Vas. Secretary, Tribal Welfare, Shri Ravi Dhawan, IAS, Chairperson of ST Corporation, Shri Vasudev M. Gaonkar, Director of Tribal Welfare, Smt. Triveni Velip,
President of United Tribal Association Alliance (UTAA) Shri Prakash Velip, among  others.
The Chief Minister further informed that over the years the Government has issued sanads to those living in tribal areas and that more such sanads will be issued but for that the Government requires the cooperation from individuals and Panchayats.
Dr Sawant also informed that the Tribal Research Centre in Sanguem and the Tribal Museum in Farmagudi would be set up soon for which Central funds had already been allocated. He further said that the issues related to the setting up of the Tribal Bhavan would also be resolved soon.
Dr Sawant also urged members of the community who were doing well to give a hand and encourage others from the community to come up in life.
The Chief Minister said that the Government is willing to hold awareness camps in tribal areas so that Government facilities and schemes reach the doorsteps of the tribal community.
On the occasion Adivasi Pradnyawant Puraskar awards were given to members of the tribal community for their outstanding contribution in various fields.
‘Prerana Din’ is celebrated in memory of Dilip Velip and Mangesh Gaonkar who sacrificed their lives for the cause of the tribal movement in Goa.