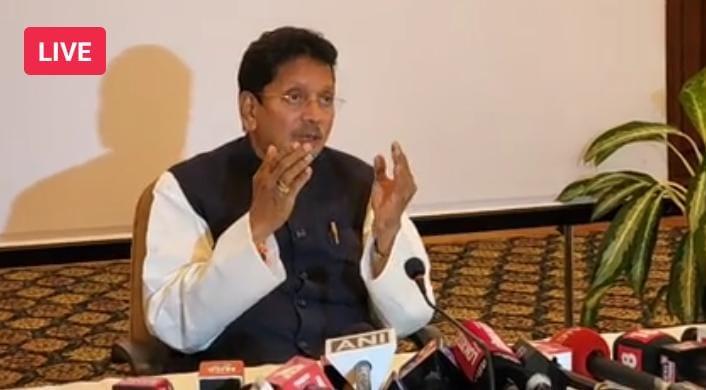 Panaji: Shiv Sena MLA Deepak Kesarkar on Thursday said that the MLAs have given right to Eknath Shinde to decide about their future course of action.

Addressing a press conference at the resort where the group has been camping since Wednesday night, Kesarkar said that there has been no discussion held on any ministerial berth to anyone.

He said that none of the MLA from Shinde camp is with him with the greed of ministerial berth. “In fact, there are six MLAs who already were in the cabinet,” Kesarkar said.

Kesarkar said that the Sena MLAs have taken the stand to respect the verdict of the voters, who had supported Sena and BJP alliance during last election.

He said that the verdict was overturned by aligning with NCP and Congress.

Kesarkar said that the Sena MLAs were sidenlined by NCP and Congress in various constituencies where the defeated candidate from their parties was projected as the next MLA.

He said that the Sena MLAs have not betrayed the verdict of the people.

Kesarkar also took his party colleague and MP Sanjay Raut head on, claiming that it was Raut who had backstabbed the party workers.

“We have not backstabbed anyone. In fact, Raut has backstabbed the party workers. He was in Sena but was working for NCP,” he alleged.

Kesarkar said that during the meeting with Shinde on Thursday, he has been empowered to take the decision during his visit in Mumbai.

Previous articleShiv Sena leader Eknath Shinde leaves for Mumbai from Goa
Next articlePanchayat elections on August 6, counting on August 7 or 8