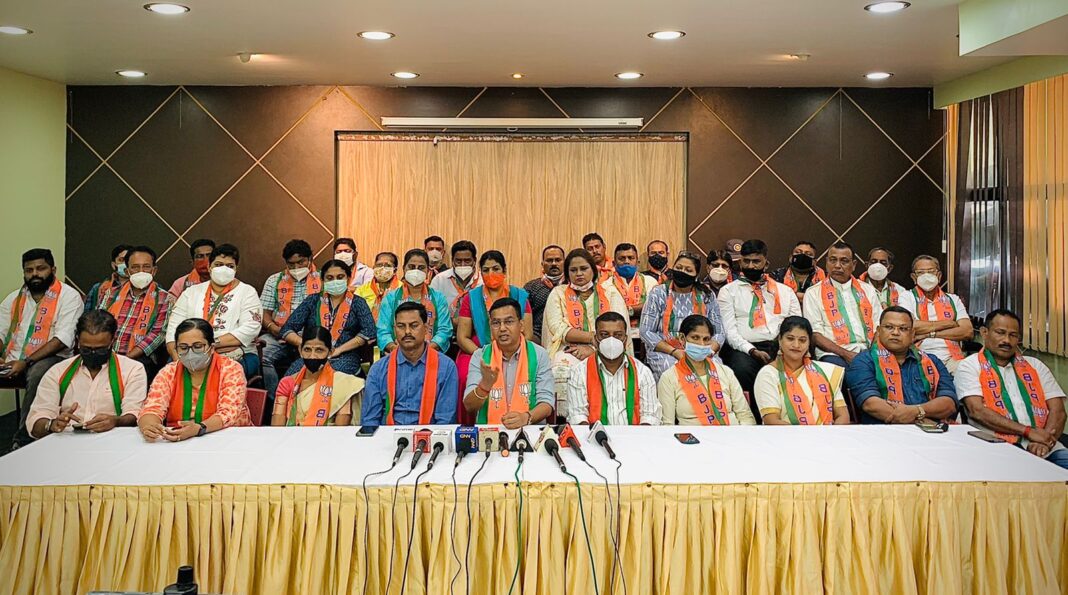 Mushrooming of various political parties has hit it’s peak in the state of Goa. This now includes rumour-spreading about panch members, such as these panch members supporting their respective candidates.

“These are totally baseless rumours and we Sarpanchas, Panch members, and even ZP members, are firmly behind our own BJP candidate – Mr. Rohan Khaunte.”
This was stated by former Sarpanch of Salvador do Mundo, Sandip Salgaonkar, today.
He was addressing the media in porvorim with Sarpanch of Penha de Franca, Swapnil Chodankar, Socorro Sarpanch Sanjay Pednekar , ZP member Kavita Naik, Ex-ZP member Vaishali Satardekar, and other panch members.

“We are firmly behind our former MLA and Ex-Minister for the work he has done for Porvorim. We feel BJP do not have any opposition if we look at Porvorim’s pace of development that Mr. Khaunte has initiated. He further added, “It’s very sad to see the mushrooming of political parties fielding unfamiliar and unknown candidates.”

“Khaunte has a long term vision of development and we will always support him for the betterment of Porvorkars. Opposition do not have any issues with them, therefore, they have started spreading baseless rumours. Mr. Khaunte will win with a thumping margin and there is no doubt about it. He further stated.

Dual term-winner Khaunte was elected as an Independent candidate and has proved his ability by developing the infrastructure in Porvorim.

When asked about Congress candidate VIKAS PRABHUDESAI he mentioned that, “we don’t know VIKAS (candidate) but we are already familiar with the overall VIKAS (development) of Porvorim constituency that Mr. Khaunte has done so far.

“We all, hereby, announce our support to BJP candidate Rohan Khaunte and no one should fall prey to any baseless rumours spread across. Out of the three Panchayats, two at least are with Rohan Khaunte and in the lone panchayat which is out of his control, 4 out of 9 members are supporting Rohan Khaunte”, added Sarpanch, Sanjay Pednekar.

“Mr. Khaunte has given a massive boost to farming within Porvorim and today 90% of the farmers are engaged in progressive agriculture”, he concluded.

Sarpanch, Swapnil Chodankar lashed out at Ex-minister Dayanand Narvekar, who has announced his independent candidature from Porvorim. He reported that, “he has done nothing for KHARVIS – a fishing community of Goa.
“The retaining walls and all were built up with efforts of Mr. Khaunte. After a sound sleep of 10 years Narvekar is now trying to show his existence but he does not possess any value now”, Chodankar added.
“To garner votes, he’s trying to fool the Bahujan Samaj and use the community’s name to gain votes”, he alleged.
“For the past 20- 25 years there was no development in Porvorim and now we can see a developed Porvorim. It’s only because of Mr. Khaunte”, he further stated.
Candidates who are now trying their luck in Porvorim should work first at a grassroots level.