Like Vishwajit, Lobo and Neri should write to CM Sawant opposing Coal and Double Tracking : Vijai 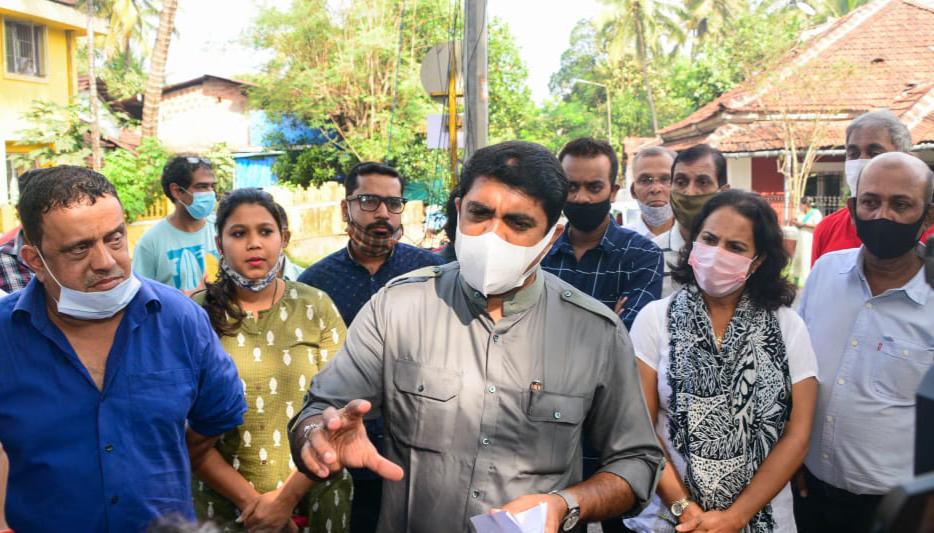 On the sidelines of inaugurating new water pipeline work in Fatorda, the Goa Forward Party President Vijai Sardesai said that “this work was long overdue and that Citizens were not getting water regularly as the pipeline was very old. New pipeline will be laid from Tolleabandh Circle to B M Servicing Road and surrounding areas of Modsai and Borda in Fatorda Constituency.” Sardesai said that Chief Minister boasts about providing 24×7 water supply but is unable to do it and that his govt has become corrupt and the old pipelines are corroded. We need to ensure that citizens get 24×7 water supply said Vijai Sardesai.

The GFP Chief welcomed the move of health minister Vishwajit Rane writing to Chief Minister Sawant asking him to scrap the IIT project at Melauli. Sardesai said Rane’s words have to be followed up , if the project is not shifted out of Sattari , then Vishwajit Rane should quit from the Cabinet and be with his people. “This is the only way his people will stand with him, Vishwajit has a future, he should quit the government if his demand to scrap IIT is not met ,then only he will be able to move forward said Sardesai.

Sardesai stated that mere statements will not do, and that Lobo and Filip Neri should immediately write to Chief Minister today itself mentioning they are opposed to coal and its transportation & the ongoing project of double tracking meant to facilitate coal movement.

Vijai further said that “If the Govt doesn’t respond to their request then they should move out of the Cabinet and quit BJP as a sign of responsibility and accountability to the people.”

They (Lobo/Neri) should stand with people. This Sawantwadi Govt cannot give justice to Goemkars. Pramod Sawant is taking instructions from Delhi and implementing those directions which are in interest of Delhi lobby and not Goemkars said Sardesai.

The GFP Chief also said that the “Waste Management Minister Lobo is now saying that sonsoddo issue will be resolved after municipal polls. I want to ask whether BJP wants to make this as an issue for Municipal Polls”. The BJP wants to make politics out of garbage and don’t want to solve this issue, so that they can play politics over it said Sardesai

Chief Minister Sawant who is also the Chairman of Solid Waste Management Corporation is not able to get his files cleared from his subordinate like Urban Development Minister Milind Naik. Milind has kept file pending for technical approval which is sent by Solid Waste Management Corporation which has a panel of experts. If an untrained person like Milind Naik is approving what is sent by experts then God only save Goa said Vijai.

Milind Naik is not approving the file as he has pecuniary interest in approving mini garbage plants which have neither been recommended by the MMC or by the Govt’s own specialised agency – The Solid Waste Management Corporation. This has been made abundantly clear by Michael Lobo himself in the press interaction yesterday.

In a similar case, the Lohia Maidan upgradation work order under GSUDA has been kept pending by the UD Minister for not having received the required paper weight from the contractor. It may be recalled that Former Governor Satya Pal Malik had issued directions to hasten the process of issuing work order by having even personally visited and seen the neglect of the symbol of Goa’s revolution & subsequent liberation. Sardesai said he had put a starred question on the same, which is listed on last day of the session as Question Number 1 . I am hoping that work order will be issued before that said Sardesai, failing which the neglect will be exposed on the floor of the House said Sardesai

Previous articleKundaim, Verna and Mollem to have Power shut down in Coming days
Next articleSudin Dhavalikar condemns BJP leaders’ statement against his party