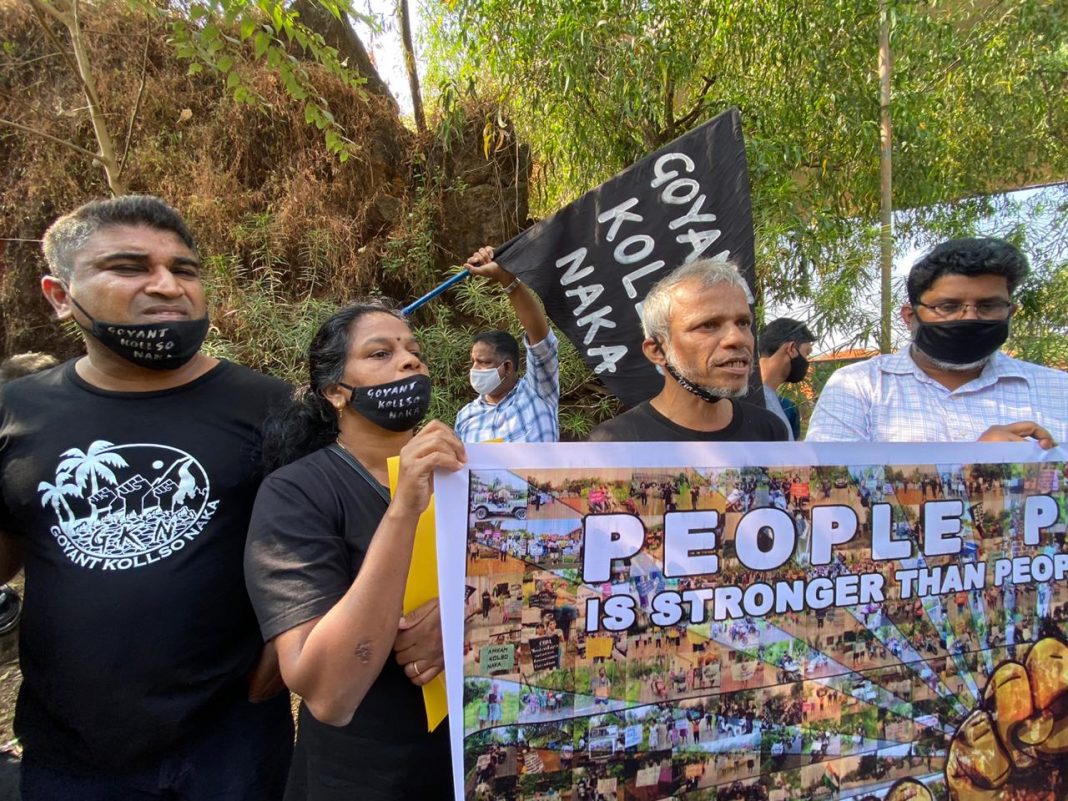 Panaji: Keeping forth their demands and urging chief minister Pramod Sawant  to fulfil them immediately, Goyant Kollso Naka (GKN) on Wednesday held protest outside the Secretariat just before the cabinet meeting.
In a letter to the chief minister, GKN inferred how the government has turned a deaf ear to all their demands. “We have time and again placed before the Government Authorities numerous evidences suggesting without an iota of doubt that coal transportation through Goa must be stopped along with related infrastructure projects, that Goa’s rivers and coasts must be maintained under the control and autonomy of the local communities; and that solar power, and not fossil fucls, is the way forward. However, none of these arguments or facts have been refuted or challenged by you, or any of the officials, though the subject has been a raging controversy over the past 8 months,” it stated.
Coming down heavily upon the CM, GKN stated, “The assurances that to not allow increase of coal handling in Goa and that you will reduce coal transportation are lies, since
you say at the same time that you are going ahead with the double tracking. You should have stopped the double tracking works of SWR, which are purely for coal transportation as per your own records, if you were sincere.”
Stating their demands must be met on priority basis, GKN put forth their demands which included to stop coal handling at MPT and transportation through Goa, to scrap bouble tracking of SWR, land acquisition proceedings, all MPT Expansion projects, Betul Port, and Pprogrammes for MPT, Retain autonomy of the local communities over the coasts and rivers, to convert MPT into a Port for green cargo and cruise tourism, Sagarmala Master Plan, Major Port Authority Bill 2020, to delist Goan Rivers from NW Act 2016, to stop river dredging and withdraw proposed Jetties, Transmission Lines and start Afforestation at Sangod, achieve Solar Power targets and stop burning Coal. It also demanded to cancel all forest and wildlife clearances granted for three linear projects, all coal transportation highways.
Giving the CM an ultimatum, GKN stated that they will intensify their agitation if their demands are not met immediately.
- Advertisement -