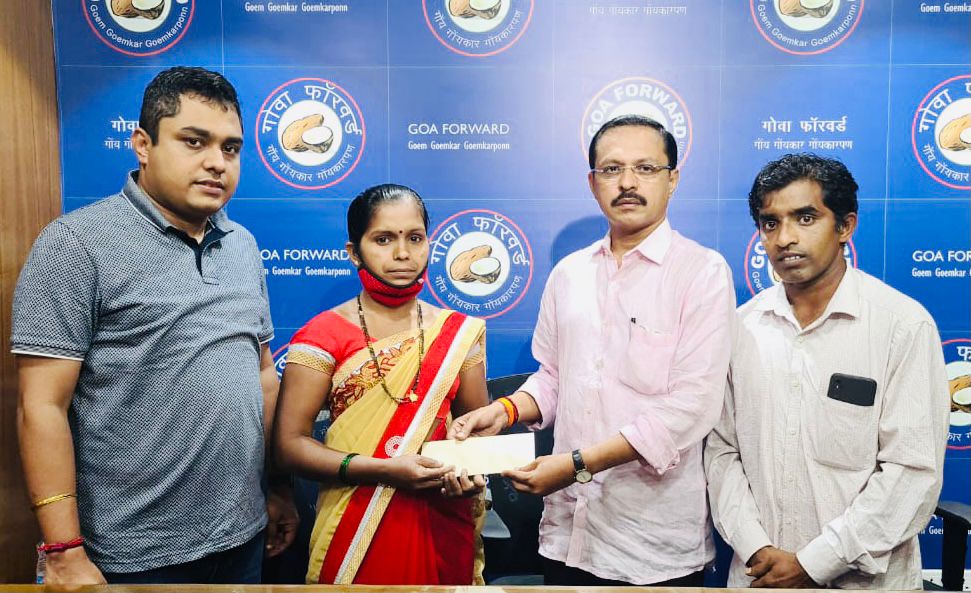 Bicholim : The Goa Forward Party on Saturday provided financial assistance to Urmila Gaonkar, who was injured by a Police Firing Range bullet at Maulinguem in Mayem Constituency.

The President of GFP Vijai Sardesai had assured to help the victim after he had met her, while he was touring Mayem constituency last week. He had demanded that Urmila Gaonkar should get justice and had sought intervention of Hon’ble court by taking Suo-Moto cognisance.

On Saturday, Sardesai decided to give financial assistance to Urmila Gaonkar, which was handed over by GFP leader Santosh Kumar Sawant in the presence of GFP General Secretary(Org) Durgadas Kamat.

Sawant said that Goa Police had failed to register FIR in the bullet ricochet case. “Though this bullet had hit Urmila Gaonkar, the government authorities didn’t help her. Such incidents should stop taking place in Maulinguem, hence we have decided to file Public Interest litigation in the High Court, if the government fails to take measures.” Sawant said.

Sawant informed that on 27th January, the bullet had hit Urmila Gaonkar, but since then Goa police failed to file FIR or take any measures at Police Firing Range, hence these bullets are travelling 3 to 4 kilometers.

Kamat said that this exercise is risking the lives of villagers and hence Goa Forward has taken this issue very seriously. “People from this village live in fear as they never know from which side and when the bullet will come and hit them.” Kamat pointed out.