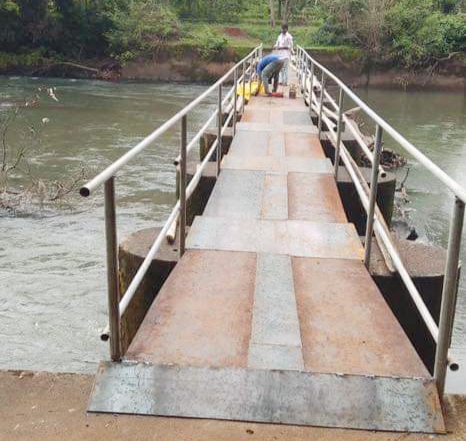 Valpoi: Almost 45 days after the floods washed away the Paikul village bridge in Sattari taluka, the Water Resources Department (WRD) has finally constructed a temporary footbridge for the convenience of the villagers who were cut off from the mainland.

The bridge collapsed due to floods in Sattari taluka in July, making it difficult for the villagers to commute. The WRD has now completed the construction of a temporary footbridge at Murmune village Bhandara embankment with iron planks.
The Citizens will be able to commute safely from this footbridge.

The construction of a new bridge has been undertaken at Paikul village, and the government has announced that the new bridge will be constructed at the cost of Rs 12.50 crore. A tender in this regard will be floated soon as the State Cabinet has approved the bridge.

After the bridge collapse, the Paikul village was completely disconnected from the other villages; as such, the villagers faced many problems. Hence it was decided by the Chief Minister to initially make a temporary arrangement till a new bridge is constructed.

The Paikul villagers have expressed their happiness and said thanks to the Chief Minister Pramod Sawant.