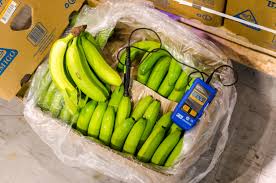 Mapusa: Food and Drugs Administration on Friday raided several premises to check for artificially ripened bananas. Though there was no instance of use of chemicals to ripen banana was observed, the FDA officials at Mapusa market found bottles of plant growth regulator Ethapone was found hidden in one of the shop.

Health Minister Vishwajit Rane on Thursday had ordered FDA officials to take up extensive drive against artificially ripened Bananas across the state, using chemicals. He had said that carcinogenic substances were used to ripen the fruits resulting in increase of cancer cases in the state.

FDA, in a press note issued, said that as promised, prompt action was taken and surveillance drives were conducted early morning today at Mapusa Sub-yard market by a team led by Richard Noronha (Designated Officer) along with Amit Mandrekar and Sujata Shetgaonkar (Food Saftey Officer) to check chemical ripening of Bananas.

A total number of 15 banana vendor premises were inspected and 13 samples are drawn. The premises were thoroughly checked for any evidence of the use of chemical ripening agents.

In one such premise; shop no 39 which was operated by Noor Ahmad Allupty, bottles of plant growth regulator Ethapone was found hidden.

During the premise inspection, stock of bananas that had arrived from Belgaum was being loaded into his shop and a stock of around 1500 kilometres was already stored in the shop.

The vendor admitted to using the said chemical for ripening purposes. The said stock of 1500kg worth 60,000 was taken up for destruction in the interest of public health at the Mapusa waste disposal site with assistance from Mapusa Municipal Council. A legal notice was immediately served to the said Noor Amhed.

However, no evidence of chemical ripening was found in the other 14 premises hence samples of fruits were drawn for laboratory analysis from which one part shall be analyzed through a third-party lab.