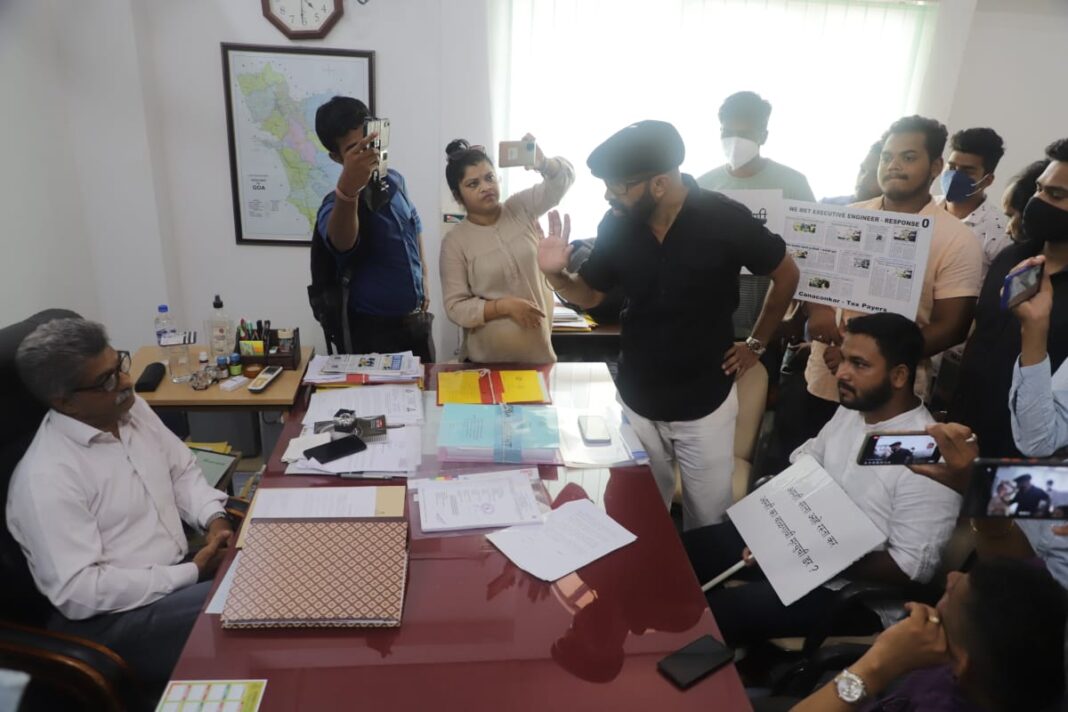 Panaji: PWD Chief Engineer D C Gupta on Tuesday assured Congress leader and people of Cancona to ‘black list’ a contractor, awarded work of Margao-Cancona highway, for not starting the work. Former was gheraoed by the Cancona locals in his office at Panaji.

GPCC General Secretary Janardhan Bhandari along with locals of Cancona gheraoed PWD officials demanding hotmixing of road and black listing erring contractor. They also demonstrated in the premises of the PWD office at Altinho-Panaji, and warned officials that they will not move from this place unless and until they get concrete solutions to dilapidated roads.

Bhandari said that officials are giving ‘zero response’ to the follow-ups of the road work. “we met all the concerned officers of PWD. But they are not giving any response in regards to completion of the road.” He said.

He demanded that all pending road works on NH 66, including the newly built Manohar Parrikar bypass at Canacona be started.

He said that accidents on Margao-Cancona road have become an almost daily feature. “people are facing health issues due to the bad condition of roads. Many have backbone problems. Hence, I request PWD to either declare the Margao-Cancona road as unsafe to drive or provide ‘stay facility’ to all the people of Cancona in Margao or nearby to work places, to avoid the accidents.” Bhandari said.

According to Bhandari, PWD had issued the work order to a contractor in October 2021, but the work has not started. “This is how the system of PWD works. Officers take bribes from contractors and hence the latter behave how they want by ignoring the work.” He said.

According to Bhandari regular commuters from Canacona to Margao, those who work in Margao and Verna Industrial Estate, have to face hardships due to the bad condition of the highway

Bhandari said that only 40 days have left for the monsoon and hence he doubts that this work will get completed before the rainy season. “we have brought all essential things and food items, we will not move from the PWD office till we get assurance.” He said.