BJP objects to its own decision in MMC, demands inquiry in biomethanation plant rates

Margao: Ahead of the municipal polls, the Bharatiya Janata Party (BJP) has began its campaign against the outgoing ruling council in Margao Municipal Council, which was affiliated to Goa Forward Party.  BJP Fatorda and Margao Mandals held a joint press conference on Thursday objecting to the hike in the charges for Birth and Death certificates in the MMC.

BJP Fatorda and Margao Mandals demanded that the hike in the charges application for Birth and Death Certificates be withdrawn. BJP leader Sharmad Raiturcar said the hike is taxing common people, who have to often visit the council to get these certificates. Coincidentally, MMC council, which had five councilors from BJP, had unanimously adopted the resolution to hike the taxes. The BJP had not expressed unhappiness over the decision during that time. 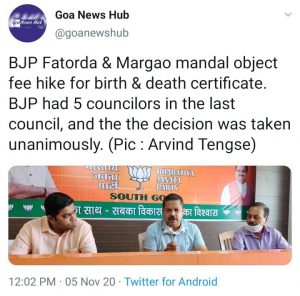 Conduct inquiry against difference in rates for Biomethanation plants: BJP

Raiturcar demanded that Chief Minister Dr Pramod Sawant should conduct enquiry and initiate action against those persons or departments involved in difference in rates of biomethanation plants. Shadow Council of Margao had raised strong objection to this difference in the rates for the same kind of plants.