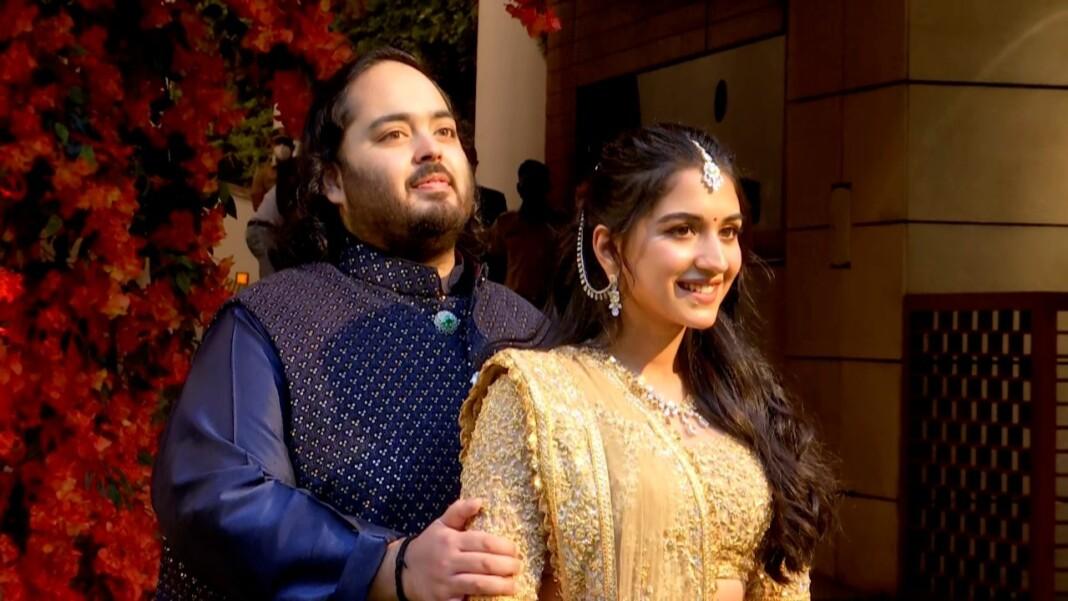 Radhika Merchant and Anant Ambani got formally engaged today amidst family, friends and revered traditions at the Ambani Residence.

Age old traditions such as the Gol Dhana and Chunari Vidhi – followed since generations among Gujarati Hindu families – were conducted with great enthusiasm in the family temple and ceremony areas even as the families exchanged gifts and greetings, bonhomie and fun and were treated to a surprise performance by Ambani family members, led by Mrs. Nita Ambani, Anant’s mother.

Gol Dhana – literally meaning jaggery and coriander seeds – is a pre-wedding ceremony in Gujarati traditions, akin to an engagement. These items are distributed at the groom’s place where the event takes place. The bride’s family comes at the groom’s residence with gifts and sweets and then the couple exchanges rings. After exchanging rings the couple seek blessings from their elders.

The families followed Anant and Radhika to the temple to seek Lord Krishna’s blessings for the union and the evening’s ceremonies. From there the group moved to the ceremony venue to start the functions with a Ganesh puja followed by the reading of the traditional Lagan Patrika or the invitation to the upcoming wedding. Gol Dhana and the Chunari Vidhi followed with blessings and gifts exchanged between Anant and Radhika’s families. A surprise dance performance by the Ambani family members led by Mrs. Nita Ambani was loudly cheered and added to the enthusiasm and familial bonding among all present.

Sister Isha then announced the commencement of the Ring Ceremony and Anant and Radhika exchanged rings in front of family and friends and sought their blessings for their upcoming union.

Anant and Radhika have known each other for a few years and today’s engagement ceremonies brings them closer to their upcoming marriage in the coming months. Both families seek the blessings and good wishes of everyone for Radhika and Anant.

Anant, son of Nita and Mukesh Ambani, completed his studies from Brown University in the USA and has since served at Reliance industries in various capacities including as a member on the Boards of Jio Platforms and Reliance Retail Ventures. He currently leads the energy business of RIL. Radhika, daughter of Shaila and Viren Merchant, is a graduate of New York University and serves as a Director on the Board of Encore Healthcare.

Previous articleIllegal moving food carts near GMC will be a thing of the past, govt notifies the area as No Parking
Next articleGCA appeals CM to hold meeting to discuss construction of cricket stadium