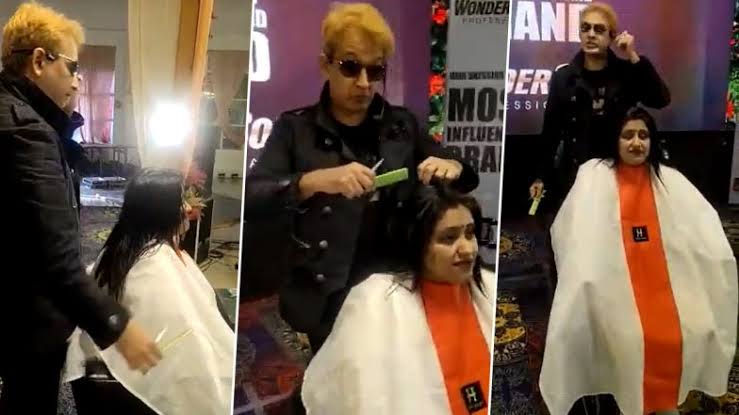 New Delhi: Renowned hairstylist Jawed Habib sparked a controversy after a shocking video of him spitting on a woman’s head, while he was giving her a haircut, went viral on social media. As per reports, the video is from one of his training sessions in Muzaffarnagar, Uttar Pradesh. However, it is unsure when the video was actually shot.

In the video, a woman is seen sitting on a salon chair on the stage. Habib is seen preparing to cut her hair while giving hair care tips.

In the video, Jawed, while cutting the woman’s hair, can be heard saying, “Mere baal gande hain. Gande kyun hain? Kyunki shampoo nahi lagaya hai. Dhyan se suno… Agar pani ki kami hai na…. (My hair are dirty. Why are they dirty? Because I have not used shampoo. Listen carefully… If you don’t have water. If there’s scarcity of water)”. Habib then spits on the woman’s head, and walks towards the crowd, saying, “Abbe is thook me jaan hai (Hey, this spit has life).”

Soon after Habib performed the ‘shameful’ act, the audience is heard cheering and applauding for what he did, in much surprise, clearly showing that they took it as a ‘joke’. However, the woman looks disturbed.

The woman in the video has been identified as Pooja Gupta. A video featuring the victim has also surfaced online after the incident. Pooja said that she is from Baraut and runs a salon named Vanshika Beauty Parlour. She said, “I attended a seminar of Jaweb Habib sir yesterday. He invited me on stage for a haircut. He misbehaved. He showed that if you don’t have water, you can use spit.”

She added, “I did not get the haircut. I’ll get a haircut from a roadside hairdresser but not Jawed Habib.”

As soon as the video went viral, netizens started slamming Habib for his action, calling it ‘humiliating’ and ‘disgusting’.