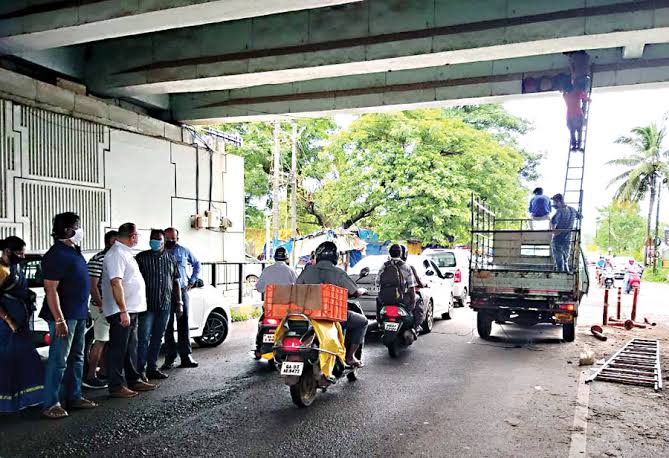 Panaji: Following the heavy traffic at the Tar-Bastora underpass, two more traffic signals have been installed in a bid to ease the traffic flow.

Earlier, PWD’s highway section had installed traffic signals at four different locations for the smooth flow of traffic at the Tar-Bastora underpass. As one of main junctions, the underpass witnesses heavy vehicle flow making it difficult for commuters. The need for more traffic signals was felt as motorists and riders witnessed confusion while crossing due to the distance between two sides.

The traffic signals were installed after a joint inspection was conducted by Aldona MLA Glenn Ticlo in the presence of Bastora sarpanch Ranjit Usgaonkar and other panchayat members; Franky Carvalho and others were also present.

“We have taken up the work of installing traffic signals under CSR,” Ticlo said.

“I had made a lot of requests to the PWD’s highway section, and also to contractor through the department but the traffic signals installed here were insufficient as there is a heavy flow of traffic at the junction.  There used to be confusion among the commuters, hence through CSR activity we have got more two traffic signals installed at the junction. With this, the safety of commuters moving to and fro will be taken care of,” Ticlo added.

Bastora sarpanch Ranjit Usgaonkar said, “Following our request, we are thankful that two more traffic signal lights have been installed.”