Show me where it is written in Municipal Act that election for Chairperson should be by secret ballots: Digambar Kamat

Panaji: Amidst raging debate on ordinance making show of hands as the method to elect the Chairperson of the Municipal Council, Margao BJP MLA Digambar Kamat said that the Municipal Act do not make it compulsory to have secret ballots for the elections of the municipal head.

The debate over the issue is heating up ahead of the elections for the post of Margao Municipal Council Chairperson. After the ouster of four-day-old Chairperson Ghanshyam Shirodkar, the elections for the new head is due. Goa Forward Party President Vijai Sardesai has vehemently opposed showing of hands as a method to elect new chief, adding that voting by secret ballots must be compulsory.

Talking to reporters in Panaji, Kamat questioned “show me, where in the Municipal Act, it is shown that the voting by secret ballot is compulsory?” 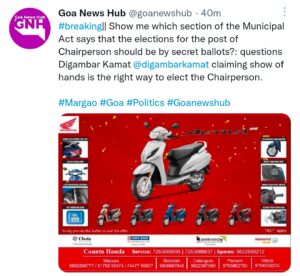 He said that “some people” insist for secret ballots because they want that some of the members (councilors) to defect overnight.

“The logic is very simple. Those who are having the numbers should rule,” said Kamat. 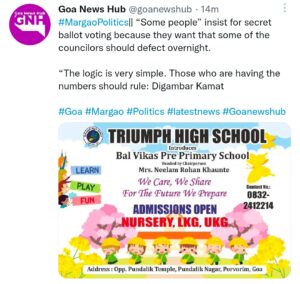 He said that in the similar fashion, the Speaker of Goa Legislative Assembly is elected.

Kamat said that the recent amendment in the municipal Act has also made it mandatory that majority of the members should sign a no confidence motion.