Panaji: Goa government on Thursday signed a Memorandum of understanding with four national start ups which would skill at least 1,000 Goans youth and help them to find the right job placements.

Speaking on the occasion, Sawant said that the Goan youth needs to look beyond

only government jobs for employment.

“The government has been continuously trying to get new, non-polluting industries into the state. We have spoken to many large software companies to establish offices here,” he said adding that “they are used to being located in places like Bangalore, Hyderabad and Pune which already have a large talent pool. “So we are now striving to build our own talent pool to make Goa an attractive destination for these companies,” he added.

Sawant said IT companies have some of the highest paying jobs, and getting them to Goa would benefit not only our youth but the entire economy. 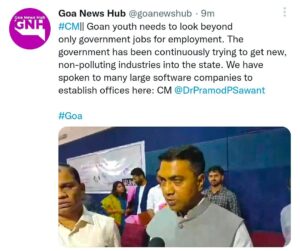 He said that all the four start ups which are associated with the State government will be providing advanced education to nearly 1,000 students annually and also will provide them the job placements in the relative industries.

Previous articleShow me where it is written in Municipal Act that election for Chairperson should be by secret ballots: Digambar Kamat
Next articleEnforcement Squad under Cotpa reconstituted