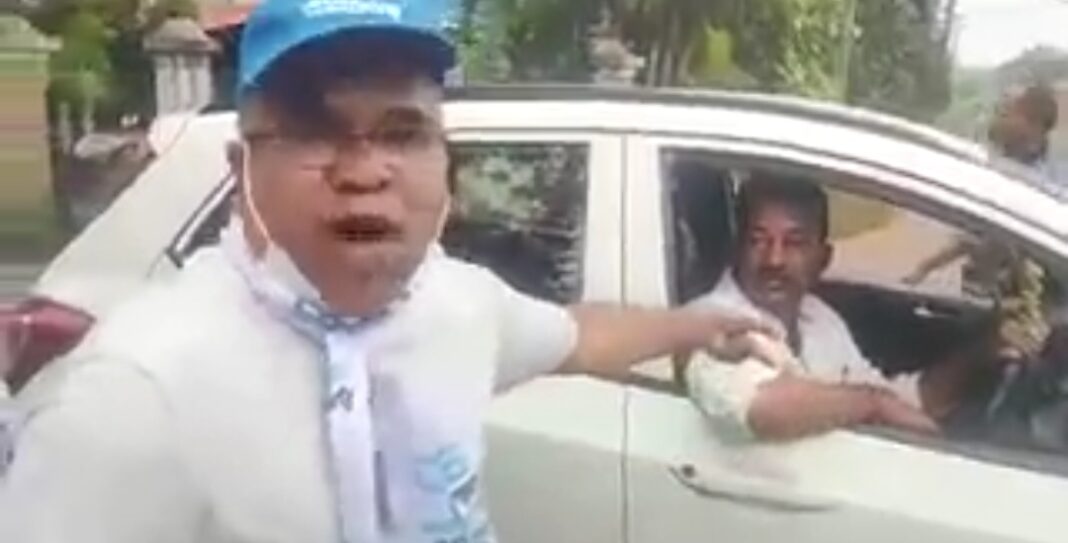 In Shocking and Condemnable turn of events at AAP’s Rozgar Yatra in Saligao sitting Sarpanch of Sangolda Ulhas Morajkar along with his supporters attacked media covering AAP’s peaceful Rozgar Yatra. Morajkar and his supporters were seen roughing up and threatening media while blocking the road for other commuters while the media was taking the byte of AAP leader and Taxi Union Leader Chetan Kamat along with AAP Assembly incharge Sandeep Pednekar.

Media persons were taking the byte of AAP leaders just as the Rozgar Yatra was about to start while Morajkar pulled up in his car and his supporters started by roughing up media persons present. Morajkar went on to attack and accuse the media of blocking his car on camera when confronted for this act. AAP volunteers at all times maintained their stance of peacefulness and stood firmly with our friends from the media as Morajkars supporters started threatening them. After being confronted by AAP volunteers and media persons the sarpanch had to leave with his tail between his legs.

“The Sarpanch himself behaved in a way that was shameful. He accosted media persons and blocked the road and his supporters threatened media who were doing their job. This behaviour is shameful and condemnable.” said Chetan Kamat AAP Goa leader. “t is very clear that this was an attempt to stop the ROzgar Yatra and intimidate AAP. They are afraid they scared of AAP because they have failed Goa and Saligao” added Kamat

AAP is holding 75 booth level meetings daily during the Rozgar Yatra and today had 3 rallies at Margao, Fatorda and Saligao. Across Goa AAP has met with huge response and it is clear that the ruling MLAs are scared.

Arvind Kejriwal in his visit to Goa last month had announced his guarantee of providing employment to every youth when the Aam Aadmi Party government is formed in the state. He had promised that every youth will be given employment and Rs 3,000 per month till the employment is provided. Kejriwal announced that 80 percent of jobs in the private sector will be reserved for the youth of Goa. Rs 5,000 would be provided monthly to families who lost employment due to shutdown of tourism and mining. AAP Government will further establish a Skill University in Goa on the lines of Delhi’s DSEU. AAP will bring an end to nepotism in government jobs in Goa and the jobs will be made available to the common man