Panaji : COVID19 surge has affected children adversely. Children who have lost their parents due to the virus are the worst victims, moreover under...
Read more
Blog

Pravin Naik will be the Fatorda Forward candidate in Ward No. 6. He was seen canvassing in his ward in Fatorda along with Goa Forward President and Fatorda MLA Vijai Sardesai and his supporters.

Vijai Sardesai, while speaking to reporters, said that Pravin Naik, one of his strong supporters and social worker in Ward 6 is being given the opportunity to take the issues facing his Ward to the municipality. “Pravin is a hardworking and accessible worker, and he will ensure that he gets elected this time, said Vijai. “The response in the ward has been overwhelming in support of Pravin” said Sardesai. 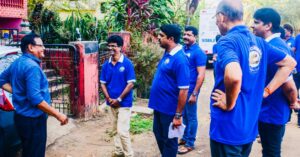 Dr. Babita Prabhudesai, former chairperson of the Margao Municipality and the incumbent councillor of the ward, said “Pravin is a sincere and honest worker. Even during my tenure as the councillor and chairperson, he was my point man in the ward. He knows the residents and also their issues. They trust him and he does his best to solve the problems of the ward. No doubt he is a deserving candidate and I’m sure he will be a good performer. “

Paresh Natekar, a prominent resident said “Pravin has been our invisible councillor in the ward. No doubt we had our Councillor Dr. Babita Prabhudesai who was the chairperson, but Pravin would be the go-to guy to get our work done. Dr. Prabhudesai would resolve our issues as the mayor but Pravin would do the running around and get the work done. We wish him the best in his endeavour to represent our ward in the MMC”.

Rosario Dias, another resident, questioned if there is any decent opposition in the ward. “The names of the opponents doing the rounds are people who use anti-social elements to disrupt the peace in our area. The fact that such candidates have links with such elements itself should be condemned. “Pravin is a simple and honest guy. He deserves to be elected as a Councillor. I’m sure that Ward no. 6 will vote and elect him and show the opponents that enabling criminals to take law in their hands in our area will not be tolerated” said Dias

Pravin is elated by his nomination. “Firstly I would like to thank my mentor and MLA Vijai Sardesai for having trusted me to take up this challenge. Issues of our ward are few, but it is only with the help and support of our MLA that our issues get resolved. I vow to be honest and be accessible, and help the people of the ward .“ said a confident Pravin.

Panaji : COVID19 surge has affected children adversely. Children who have lost their parents due to the virus are the worst victims, moreover under...
Read more

Panaji : COVID19 surge has affected children adversely. Children who have lost their parents due to the virus are the worst victims, moreover under...
Read more
Blog

Goa State Innovation Council to provide prototyping grant of up to Rs. 20,000

Panaji: Goa State Innovation Council has announced a prototyping Grant Scheme, under which an applicant will be eligible for a grant of up to...
Read more