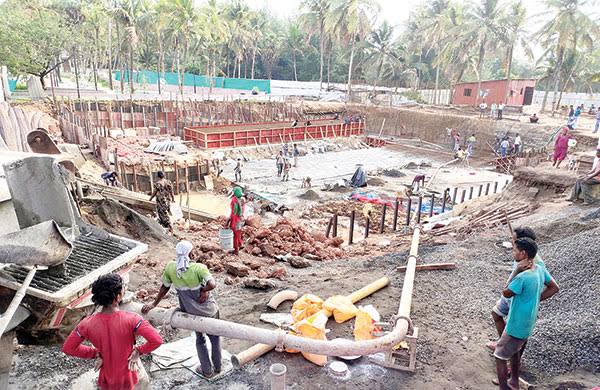 Panaji: The Aam Aadmi Party has demanded that the Goa government postpone the construction of memorial of late chief minister Manohar Parrikar and scrap the posts of two deputy chief ministers as part of austerity measures amid the economic crisis caused by COVID-19 pandemic.

At a time when avoidable expenditure is to be curtailed, the chief minister seems to be going ahead with non-critical projects running into crores of rupees, he said.

Along with the letter, Naik attached pictures of the ongoing work on the proposed memorial for Parrikar.

“The work appears to be going on in full swing at this construction site at Miramar beach. In the current financial condition of the Government of Goa, every rupee matters, yet the CM has chosen to expend crores of rupees on this project which can easily be postponed to a later date, he said.

Naik said many other such projects could also be postponed or even scrapped, thereby saving the government hundreds of crores of rupees.

“Furthermore, cabinet positions, such as that of two Deputy CMs, along with perks and resources dedicated to such posts of only political convenience and of no benefit to the common man, should also be scrapped, he said.

“On behalf of the Aam Aadmi Party as well as all Goans, we commend your (governor”s) timely and necessary action, and whole-heartedly echo your statement that the need of the hour is to make available greater resources towards COVID19 relief measures and for reviving the economy,” Naik said in the letter.

However, the governor”s advice seems to have fallen on deaf ears, he claimed.

Notably, the Goa cabinet on Wednesday approved several austerity measures, including ban on new recruitment, and non-essential foreign and domestic tours till December 2020.