Nations have a lot of rules, but art and music doesn’t have any such borders: K.M. Venugopal ‘Anandi Gopal’ an inspiring story based on true incident: Sameer Sanjay Vidwans 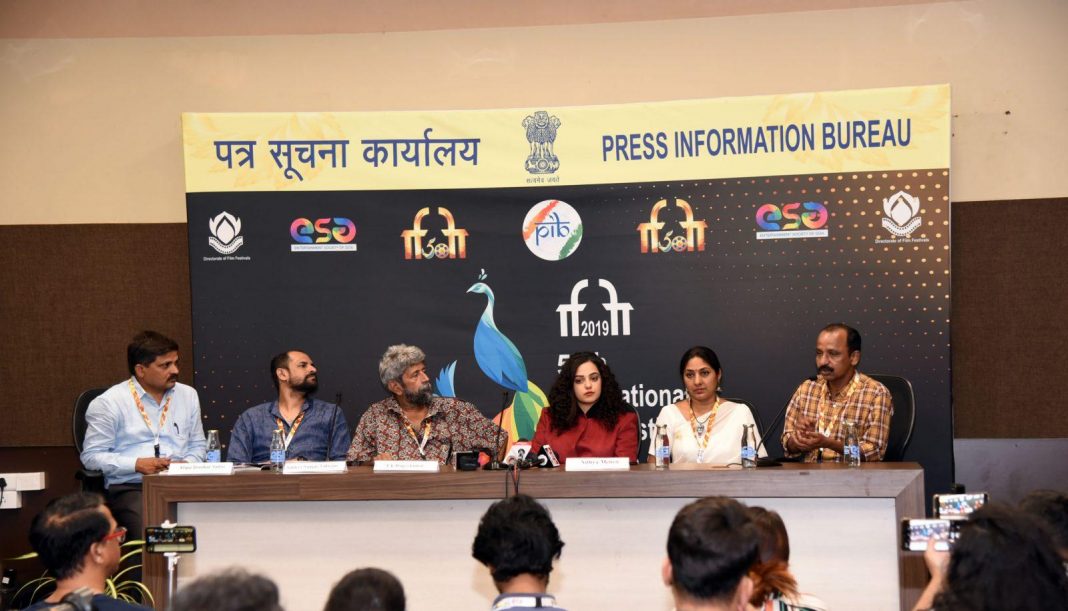 When loudspeakers(Kolambi) are silenced forever by a government order, the world turned topsy turvy for an old couple who depended on them for a living. A young artist who meet this couple turned this tragic nature of the Kolambi’s fate into a work of art thereby giving back Kolaambi’s their voice and the couple their life. A beautiful Malayalam film ‘Kolaambi’ that narrates this warm relationship between the old couple and a young girl was the focus of discussion at a media conference organised at International Film Festival of India today in Panaji when the cast and crew of ‘Kolaambi’ met the press.  The director of another path breaking biopic film ‘Anandi Gopal’ Sameer Sanjay Vidwans also joined the press conference.

Director of Kolaambi, T.K. Rajeevkumar said that his film’s plot is about a situation when noise pollution act came into existence in 2005. “ It’s about a man living in the 1960’s, who is passionate about singers. He believes in archiving the history of Kerala through his loudspeaker. This man was after every celebrity and leader,” he said.

Talking about her role in Kolaambi, lead actress Nithya Menen said, “When the director came to me with this beautiful idea, I really liked the concept. For me, working with him on this film was really nourishing. I believe true artist feel claustrophobic in the commercial environment. For this reason Kolaambi is like a breath of fresh air for me.” Another actress in Kolaambi, Rohini also participated.

Elaborating on the story of his film, Director of ‘Anandi Gopal’ Sameer Sanjay Vidwans said that it is the story of a couple- Anandi and Gopal Joshi set around 140 years ago. “ Despite the opposition from the society Gopal encourages Anandi to study further in USA and she went onto become the first lady doctor of India, ” he said.

Kolaambi, a Malayalam film directed by T.K. Rajeev Kumar tells the story of an old couple who turned jobless when Kolaambis (loudspeakers) are banned by government.  A young artiste, who comes to Kochi to scout around for a subject for her Art Installation, meets the couple by accident. She is instantly drawn to the tragic nature of the Kolambi’s fate and uses it to create a work of art at the Kochi Biennale.

Directed by Sameer Vidwans the film is based on a true story from the 19th century India. Nine-year-old Yamuna (aka Anandi) was married to Gopalrao Joshi, who had asked her parents to ensure she becomes literate. After a personal tragedy, Anandi vows to become a doctor and Gopal supports her decision. But they are heavily criticised by their kin and society, which does not accept a girl being educated and more so become a doctor. Indomitable Gopal sends Anandi to USA to study and become the first female doctor of India!