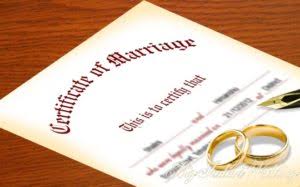 Panaji: Goa government on Tuesday announced that they have uploaded all the marriage certificates in the state right from the year 1914 online.

Sawant said that the certificates of the marriages which were registered from 1914 till 2010 would be available online.

State-run Goa Electronic Limited as digitalized the records, which are uploaded on the website for the people to download it.

Cabral said that the certified copies of the marriage certificates with the digital signature would be made available to the consumers within next two months.

“Once digitally signed copies are made available, the marriage certificates need not be certified again by any authority,” he said.

Cabral said that “in one of the humongous process, almost 8.60 lakh pages are scanned and uploaded on the website.”

The minister said that annually, around 12,000 marriages are registered in the State, which is governed by Common Civil code.

Previous articleNo one is against Mahadayi: Speaker
Next articleSo-called leaders of Goa have not even visited Mahadayi: Michael Lobo