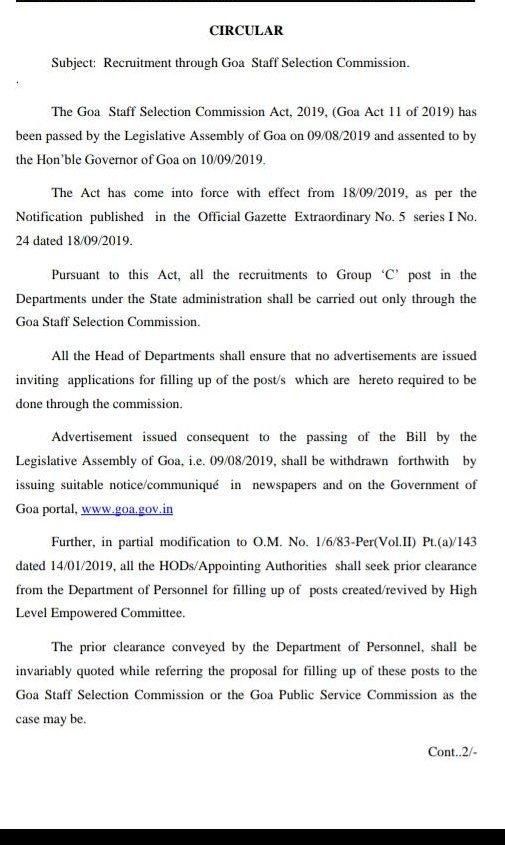 Panaji: In a fresh circular issued today, the State government has asked all departments to withdraw advertisements for posts in Group ‘C’ category published following passing of the Goa Staff Selection Commission Bill, 2019 on August 9.

A circular issued on Tuesday also bars all the Head of Departments from issuing advertisements inviting applications for filling up of the post/s which require to be done through the Goa Staff Selection Commission only.

“Pursuant to this Act (Goa Staff Selection Commission Act 2019), all the recruitments to Group C post in the Departments under the State administration shall be carried out only through the GSSC. Advertisement issued consequent to the passing of the Bill by the Legislative Assembly of Goa, that is August 9, 2019 shall be withdrawn forthwith by issuing suitable notice/communiqué in newspapers and on the Government of Goa portal www.goa.gov.in,” reads the circular.

“Further, in partial modification to OM dated January 14, 2019, all the HODs/ Appointing Authorities shall seek prior clearance from the Department of Personnel for filling up of posts created/revived by High Level empowered Committee.”

The Secretaries to the Government and HODs are directed to ensure strict compliance and submit the action taken report by October 25 vis-a-vis Departments under their administrative control.

“Failure to adhere to these instructions shall be viewed seriously and action as deem fit will be initiated by fixing responsibility for any lapse,” reads the circular.

Previous articleGovt is serious about education system in Goa- CM
Next articleIPB simplifies the clearances for investment proposals, CM reviews the board